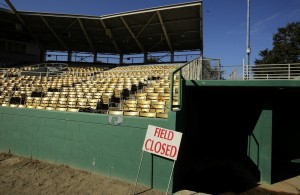 Contact your City of Orlando elected officials about Tinker Field by clicking here.

After more than a year of controversy over the fate of Orlando’s most historic public venue, the Orlando City Council is ready to act on a controversial Tinker Field ordinance that will pave the way to the ultimate demolition and redevelopment of the site as previously planned by the mayor. Orlando Mayor Buddy Dyer is finally ready to take the historic site for his own plans despite the ongoing controversy and public outcry.

The proposed ordinance also does not follow the full recommendation by the Orlando Historic Preservation Board, which voted to preserve the historic grandstands in addition to the field. 51 years ago this week, Dr. Martin Luther King, Jr. delivered his only speech in Orlando at Tinker Field as 2,000 residents watched on from the grandstands. Thousands more have memories of legendary baseball stars running the bases and quality family time. In fact, the deliberately deceiving ordinance might even make the public first think the City wants to save the historic site, but in reality it is nothing more than a cleverly worded way to destroy the historic site right after Black History Month ends.

The full city ordinance briefly details the history and importance of the site as well as the Historic Preservation Board recommendations before adding in statements regarding updates from a “staff report” and information provided by the Venues department, who are hand-picked by Mayor Dyer and some do not even have the minimum required work experience for the job. Of course, the staff “recommended that the Orlando City Council designate only the baseball ‘diamond’ of Tinker Field as an Orlando Historic Landmark” according to the proposed ordinance language which labels and defines the diamond as ‘the Property.’

That means the historic grandstands are gone. If this ordinance passes, kiss the entire historic site goodbye. The “diamond” to be protected would be a minimal portion of the Tinker Field site and facility. Public records clearly show Mayor Dyer and the City of Orlando are directly responsible for allowing Tinker Field and the grandstands to fall into disrepair. Commissioner Sam Ings has also called out Mayor Dyer and the City for the current condition of Tinker Field during his statements at previous Council meetings. Dyer has insisted the grandstands need to be torn down and the infrastructure and utilities below redone. Now, the City will attempt to use this excuse as reason to demolish the historic stands and disrupt the site with more construction work.

On top of that, the City is writing in a waiver to allow such redevelopment on the site for certain conditions. This means these actions at the site will not even require a public hearing, a vote by the City Council or any oversight. The City also weaved in language to allow it to construct temporary structures or “improvements” directly on the historically designated diamond, which means more parked cars and concert tents on the historic grounds, again without public discussion or votes. According to the language of the proposed city ordinance:

Essentially, all of the “feel-good” protections in the ordinance (like requiring a “certificate of appropriateness” by City Council vote before any action is taken on the site) do not apply to what the Mayor is planning in the immediate future. Dyer has long made it clear he intends to demolish Tinker Field and especially the grandstands. Dyer and Commissioner Robert Stuart hope to turn the historic site into a VIP parking lot for Citrus Bowl events. The proposed ordinance would allow the City of Orlando to continue using the historic site as a parking lot, just like city officials did this year for the Citrus Bowl game.

Mayor Dyer is preparing to lean heavily on Commissioner Regina Hill, who is being groomed to be Dyer’s his newest puppet on the City Council, in order to push through his latest attempt against historic Tinker Field. Last August, Commissioners Patty Sheehan and Sam Ings were the most vocal in a tense discussion on the topic that led to the City Council deferring action on Tinker Field. Hill campaigned on a “saving Tinker Field” message before being elected, seeking and receiving the endorsement of the Saving Tinker Field community group. Now, it appears she will be pressured to push the red herring ordinance allowing the mayor to demolish the historic grandstands and make Tinker Field nothing more than another vacant lot. Members of the STG group plan to meet with Commissioner Hill tomorrow.

One alternative proposal I prepared to save and preserve Tinker Field was given to Orlando City Commissioners and Orange County Commissioners. This proposal would create a living historical landmark and community park space, allowing Orlando to enjoy historic Tinker Field for another 100 years. It would also open the opportunities to develop youth programs and partnerships with the Urban Youth League and Major League Baseball among others.

Mayor Dyer, and Commissioner Hill if she votes for the ordinance as currently written, will also buck their own political party with the planned ordinance. This month, the Orange County Democrats passed a resolution calling on Mayor Dyer and the City of Orlando to save and preserve Tinker Field and the historic grandstands. The bi-partisan watchdog group County Watch also previously sent a letter to local elected officials urging to save and preserve Tinker Field.

Without any real plan or vision to preserve the history and culture of Tinker Field and the future of baseball at the site, the proposed city ordinance should not move forward as written. The first reading of the proposed Tinker Field ordinance will take place this Monday, March 9th during the City Council meeting at 2pm. Contact your City of Orlando elected officials here.