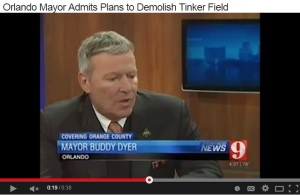 Tinker Field has been a part of Orlando history for 100 years – and this was year was the 50th anniversary of Dr. Martin Luther King’s speech from the pitcher’s mound at Tinker Field. In August, Tinker Field survived an attempt by Mayor Buddy Dyer and the Community Venues to destroy and redevelop the site when the City Council deferred action.

“At some point, we’ll do something to honor the history and heritage there,” Dyer told WFTV this evening. “I don’t think we are going to save that structure though. It’s of no use and would cost millions and millions of dollars to do anything with.”

Dyer’s claims of a possible $10 million price tag are not only disingenuous, they are clearly being fabricated. Several other cities are investing in preservation and renovation of local baseball fields while launching Urban Youth programs and other community efforts – all for much less money than Dyer is talking for grandstand repairs. There are also factors that show Dyer’s plan to “move” Tinker Field across the street is problematic. Not to mention, Dyer has already spent more than a billion dollars on other Community Venues in recent years through the Interlocal Agreement between the City of Orlando and Orange County.

None of this has to happen. Former Orlando Monarchs General Manager Mark Popkin testified to the Orange County Commission that baseball still had a future at Tinker Field despite the recent Citrus Bowl construction. County Commissioner Pete Clarke has been the most vocal in previously supporting action to save Tinker Field. At the beginning of the year, Commissioner Clarke urged a County role in preserving the historic field.

Many residents have spoken out on the issue to both the Orange County Commission as well as the Orlando City Council.  But Mayor Dyer and City Commissioner Robert Stuart want a VIP parking lot for the new Citrus Bowl, and that means historic Tinker Field has to go.

The history and culture of Tinker Field are worth preserving. So will anyone stop Buddy Dyer’s wrecking ball?