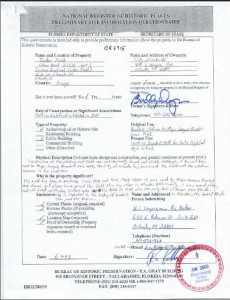 Records from the National Register of Historic Places now confirm that Orlando Mayor Buddy Dyer is responsible for the deterioration of historic Tinker Field, which Dyer has now slated for surprise demolition. The records are very telling considering charges by one City Commissioner that the City’s actions are “criminal” and considering excuses made by Dyer that the field fell into disrepair and can’t be saved.

Orlando City Commissioner Sam Ings complained to the Sentinel that he has asked Dyer for years to have the City rehab the field and Ings blamed Dyer’s City Hall for neglecting the historic site. “The city allowed the building to go into such disrepair it’s almost criminal to me,” Ings said. “It’s malfeasance.”

And now, we can better understand why Dyer is so hell-bent to destroy local history. First of all, Mayor Dyer is responsible for the deterioration of historic Tinker Field. He never cared about the local history or culture.

In records included in the National Register of Historic Places’ preliminary site information questionnaire, documents including Buddy Dyer’s own signature in June 2003 detail the “Physical Description” of Tinker Field:

“The structure of the stadium and field are architecturally sound and stable. Although it has not been used for Major League Baseball since 2000, the City of Orlando has maintained the field and the stadium remains in fair condition.”

This was sent to me by the National Register of Historic Places in Washington DC along with hundreds of documents detailing the field’s history and significance. Documents that Buddy Dyer himself signed as “Owner.” This confirms what Commissioner Ings is saying, that when Buddy Dyer took office as Mayor, the field and stadium were “architecturally sound and stable” and the field was maintained — but obviously something changed under the Dyer administration.

The only one to blame for the current condition of Tinker Field is Buddy Dyer. His own Orlando Venues website calls Tinker Field “Orlando’s most historic venue” yet he has deliberately allowed the historic site to fall into disrepair, ignoring requests from Commissioner Ings and the Orlando Monarchs baseball team to preserve Tinker Field over the years. Dyer has spent hundreds of millions of dollars on various new venues, but he could find no money worth preserving history?

Fallout from Dyer’s destruction decision has been widespread across the community already. A very active “Saving Tinker Field” Facebook page has over 500 members and no one in that group is planning on backing down. Orange County Commissioner Pete Clarke wrote a memo to Mayor Jacobs asking the County to step in, and Clarke was one of the deciding votes which enabled and funded these projects. County Watch, Orange County’s bi-partisan watchdog group, voted and sent a letter to Mayor Jacobs calling on her to take action to stop the demolition. In fact, even Dyer’s own Orlando Historic Preservation Board wanted to take action to save Tinker Field, but Dyer had a city attorney on hand to block anything from happening at their meeting this month.

And the mayor has taken notice. Dyer was spotted with his deputy chief of staff down at the site on Friday and will make a statement at Monday’s City Council meeting about it. But now that the records, with Dyer’s own signature, prove he is the one to blame, it is his administration that must correct this wrong. Orange County Mayor Teresa Jacobs helped Dyer champion the Venues package responsible for enabling and funding the demolition, and it is also time for Mayor Jacobs to step up to the plate and demand the City of Orlando take action to save Tinker Field or withdraw County funding.

The Board of County Commissioners meets this Tuesday at 1:30pm at the County Administration Building downtown and will discuss this pressing issue.