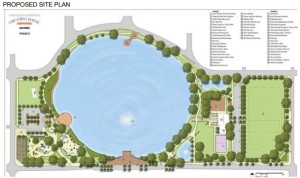 A three-part request for proposed improvements to Lake Lorna Doone Park is seeking approval later this month at the City of Orlando Municipal Planning Board. There are 11 specific proposed park improvements included in the plan. According to the proposal, additional improvements will be made in the future, including donor-driven items.

“The overall intent of the current project is to create a park to encourage better physical, social, and economic health in the neighborhoods surrounding the park,” the proposal states.

The master plan for the park calls for a walking loop going around the entire lake, a water spray park and a barrier-free playground. Residents will also have a new community garden and outdoor exercise equipment. Public artwork that reflects the “unique history of the park” and art related to items of local significance will decorate the new park if the proposal passes. There will also be basketball courts, a futsal court, a lighted water spray at the lake and the south pond, as well as littoral zone planting. New parking and restroom facilities are included on east and west sides of the park in the plans. 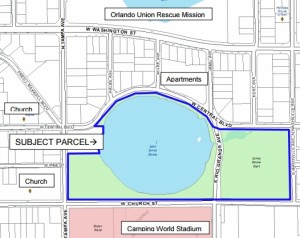 The master plan for the park was developed through an effort involving neighborhood residents, LIFT Orlando and Florida Citrus Sports.

The Municipal Planning Board will also be deciding on approval for a permanent street closure. The proposal calls for the northern end of Rio Grande Avenue, which currently extends from Church Street into the park and ending at Central Boulevard, to be permanently closed. The proposal says the permanent street closure will “provide greater connectivity for people using the park.” The closure will also allow for an expansion of existing parking area and provide for police and emergency vehicle access between Central Boulevard and Church Street through the park.

The Municipal Planning Board is scheduled to meet on December 20th at 8:30am to discuss the Lorna Doone Park proposal. The MPB will decide on master plan approval, the rezoning of the park and the street closure.

The park on the west side of the city has long needed improvement and residents are eager to see Lake Lorna Doone Park transform. What do you think about the proposed improvements? Leave your feedback in the comments.