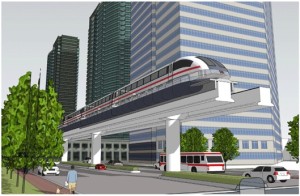 Monorail systems typically end up as nothing more than the butt of jokes, and now the proposed Orange County Maglev train appears to be headed toward the same fate. While local leaders have spent years discussing a magnetic-levitation commuter rail system to connect the Orlando International Airport and the Orange County Convention Center, the airport has reportedly refused to accept the technology after multiple formal presentations, citing too many unknowns. That rejection would guarantee the Orlando Maglev train is dead.

The proposed 15-mile Maglev train system was being promised as the missing link from the airport to the Convention Center, as well as to the SunRail commuter rail line and the International Drive resort area. Eventually, the plans called for connections reaching Lake Nona’s Medical City and even the Disney area. But there have never been concrete plans for the proposed Orange County maglev transit system and there is no track record proving the developer’s technology or ability to successfully build a maglev system.

Over the last four years, Tony Morris of American Maglev Technology has talked a big game about bringing the maglev technology to Orlando, with support from county and city officials. Last year, Orange County Mayor Teresa Jacobs and other high-level county officials met with AMT representatives, and the Orlando Sentinel ran a headline stating the maglev train was “back on track” with construction “starting soon.” Of course, in 2012, the Orlando Business Journal ran a similar headline questioning if the maglev train was “back on track?”

It seems local officials and the Orlando Sentinel fell for nothing more than a good PR stunt from the developer, who never really had plans that would work. In fact, Morris’ AMT has never completed a full maglev transit system, despite numerous unsuccessful projects around the country, some of which have cost millions of dollars in public and private financing.

The state of Virginia demanded $7 million back from Morris’ AMT after a failed maglev line at Old Dominion University. Morris spent $16 million to build a test-track, including a $7 million loan from the state that was not repaid after 15 years. Other proposals by AMT have failed or been rejected around the country, including in Morris’ home state of Georgia, where officials spent at least $10,000 on a study for Morris. Last summer, Port Canaveral rejected Morris’ pitch to study a maglev train there. There are no maglev trains in America, and only a few maglev trains are in commercial operation, all in East Asia.

The fact that after multiple formal presentations there are still “too many unknowns” for the airport to accept the technology into their new multi-modal transportation center should not really be surprising. At the end of the day, Morris may only be a good fast-talking salesman similar to a Simpson’s character named Lyle Lanley from the famous “Marge vs. the Monorail” episode written by Conan O’Brien. That episode gave us all the hilarious Monorail song.

“We don’t want a losing proposition coming into the airport. There’s risk with everything but it has to be an acceptable level of risk,” COO of Orlando International Airport Stanley Thornton said last year about the controversial maglev proposal.

Now it appears the airport has decided to officially reject the Morris proposal. Mayor Jacobs’ office has not responded for comment about the report as of the publication of this article.

Apparently, a study will now be initiated to look into a light rail project instead of the Maglev proposal for Orlando.