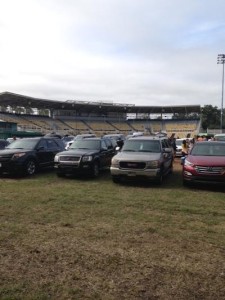 Orlando Mayor Buddy Dyer did not wait for his planned demolition of historic Tinker Field before parking cars on the field for the Citrus Bowl. But the latest example of disrespect to the historic field by Dyer and the City of Orlando not only hit hard at home in the midst of the ongoing controversy, it seemed to surprise visitors from out-of-town who let the world know the condition of Tinker Field.

One Minneapolis resident tweeted this photo of cars parked in the outfield of Tinker Field to the Minnesota Twins’ President, Dave St. Peter. Another Minnesota resident replied with his own picture showing cars beginning to drive on the field and park, then tweeting “I parked there, $25, but right next to stadium. Crazy thinking that was old spring training home.” Think any of that money will go towards renovating and preserving Tinker Field? Of course not.

It has been public for months now that Mayor Dyer and City Commissioner Robert Stuart are pushing to demolish the historic site in order to pave a VIP parking lot for the Citrus Bowl. It appears neither the Mayor nor the City feel compelled in any way to protect, preserve or renovate the historic site. In fact, according to public records, Mayor Dyer’s administration is also responsible for the deterioration of historic Tinker Field. (On May 14, 2004, Tinker Field was added to the U.S. National Register of Historic Places.) Other cities have recently preserved and renovated historic fields, why not Orlando? 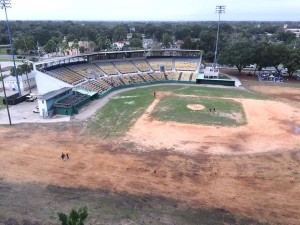 Joe Christensen of the Star Tribune tweeted this photo of historic Tinker Field outside of the Citrus Bowl on Jan. 1, 2015. (tweeted by @JoeCStrib)

Puckett’s Pond added an update: “Apparently they were parking cars IN THE OUTFIELD. THIS IS AN HISTORIC LANDMARK, DAMMIT!”

It’s also embarrassing to see this historic landmark in this condition right next to the newly renovated Citrus Bowl, which received hundreds of millions of dollars and will need millions more in renovations in the near future. Tinker Field is the only neglected Orlando public venue and Tinker Field also happens to be the most historic of all Orlando venues.

The controversy to save Tinker Field still continues despite the City of Orlando’s quest to demolish and pave the site. Now, the Orange County Commission has also decided to revisit the discussion about the fate of Tinker Field. That discussion was originally scheduled for January 6th, but has been pushed back by Orange County Mayor Teresa Jacobs until a future meeting (stay tuned for updates). The City has also promised to hold a public vote at the City Council before any demolition will occur. 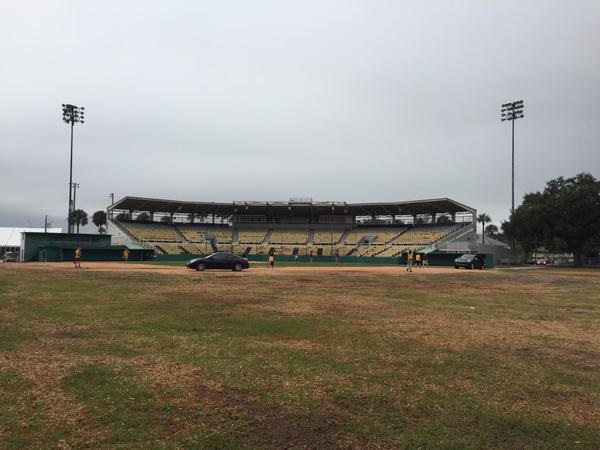