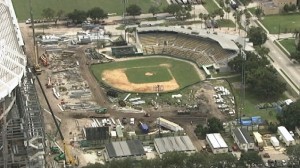 Tinker Field, the most historic of all the Orlando Venues, survived repeated controversial attempts throughout the year to demolish and redevelop the site. However, it has been made clear by Orlando Mayor Buddy Dyer in a local media interview last week that the planned demolition was simply delayed, not prevented.

The existing conditions and plans from the City of Orlando, outlined in Exhibit A, are unacceptable. To transform historic Tinker Field into a planned VIP parking area with future development is shameful and disrespectful. The City of Orlando’s current plan to “move” Tinker Field across the street is problematic and has not been studied by the Community Venues staff, according to meetings and statements made by city staff. The space would be limited and the direction could pose threats to traffic. But the options to preserve and renovate Tinker Field are endless.

Our community deserves a living historical landmark in Tinker Field.  Building off recent successful investments made by cities across America, Tinker Field can be preserved, restored and renovated for a tiny fraction of the cost being spent on other Community Venues. Instead of a parking lot, Exhibit B shows one possible solution to transform Tinker Field back into life.

The vision behind Exhibit B works historic Tinker Field into an integral community venue, part of a larger Citrus Sports Complex. The historical landmark could also serve as a bookend for the Church Street plan.

These modest suggestions are not a complete solution, however they do present one of the many ways our community can step up to the plate and save Tinker Field. The reasonable suggestions would also be very affordable, making the investment decision a no-brainer. Exhibit C details recent examples of investment being made in fields across America.

There is an opportunity to encourage new partnerships, including with Major League Baseball to create youth programs and a new MLB Urban Youth Academy. An investment in Tinker Field is a further investment in sports tourism and cultural tourism that would only compliment the Citrus Bowl complex and Church Street plans. Tinker Field also presents an opportunity to engage in more community development that would complement other recent venue investments.

You have always been proud to try to meet people half way and reach solutions instead of divisions. Saving Tinker Field is another opportunity for our community to show progress is still possible through preservation. There is also a larger concern regarding the fate of Tinker Field, as many Orange County and City of Orlando residents feel that their voices are not being heard. Even City Commissioner Patty Sheehan told WFTV News her political career was threatened by Mayor Dyer’s staff over the issue.

Thank you for your consideration,

2 Responses to "Proposal to Save Tinker Field & Preserve Orlando History"