You are here: Home › City of Orlando › Tinker Field and Orlando’s Disappearing History

Does it ever feel like history and culture are disappearing all around Orlando? Mayor Buddy Dyer’s planned demolition of historic Tinker Field is just the latest example. And while Dyer’s sudden announcement leads to more fallout and questions, it’s also important to remember the history of Orlando’s Tinker Field. And it’s important to remember that the historical designation is awarded to the playing field itself, not just the stadium or stands.

Perhaps one of Orlando’s most historical moments took place at Tinker Field when Dr. Martin Luther King, Jr. spoke there in 1964. From the pitcher’s mound, Dr. King asked for equality in Orlando 50 years ago this March. This was Dr. King’s only visit to Orlando. Pictured to the right is a March 7, 1964 Orlando Sentinel article covering MLK’s speech. Major thanks to Doug Head who discovered this nugget of history in the downtown library archives.

According to the long-lost coverage of the rally, “King, who received a standing ovation as he came out on the infield, opened his talk with the statement that the ‘wind of change is sweeping out an old order and sweeping in a new order in America.’ He said, ‘in spite of loud noises from places such as Alabama and Mississippi, segregation is on its deathbed and the only thing left to be seen is how expensive its funeral is going to be made by segregationists.'”

“He told his Negro listeners that they had a number of challenges to meet and among these is one to make full and constructive use of the freedom they possess.” The article continues, “‘Law,’ he said, ‘can’t make a man love me, but it can keep him from lynching me.'”

Irreplaceable history. Powerful words. Makes you wonder what Dr. King may have to say today.

But the field’s history goes back nearly 100 years and has even more local historic significance. It is named after MLB Hall of Famer Joe Tinker. Tinker was also recently posthumously inducted into the inaugural class of the Florida State League Hall of Fame in 2009. There’s some major baseball history at Tinker Field. In 1975, an over-capacity crowd of 6,000 turned out to see Hank Aaron, the soon-to-be-crowned home run king. Babe Ruth and Lou Gehrig even played at Tinker Field, and Michael Jordan made a stop while he was a baseball player in 1994. Years of play have been enjoyed at Tinker Field, it’s one of the oldest baseball field/stadiums in the country still standing. It was home to the Minnesota Twins spring training program from 1961-1990.

On May 14, 2004, Tinker Field was added to the U.S. National Register of Historic Places. Records from Tinker Field’s NRHP file detail more of the historic context and significance, as well as a bio on Joe Tinker. To look through the whole batch of Tinker Field documents from NRHP, click here. 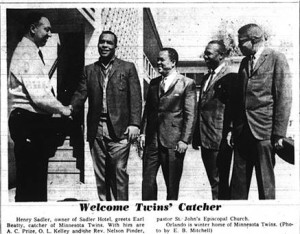 In another related story, back in 1964, the Orlando Sentinel also ran a story on the front page of their “Negro Edition” paper. It was about the Florida Voters League meeting in Orlando, with a photo showing the Hotel Sadler on prestigious West Church Street where Negro Baseball players stayed. These baseball players were forced to stay there because they could not stay with their white teammates at the San Juan Hotel Downtown. After controversy, the Twins owner Cal Griffith moved his entire team’s lodgings to a newly built “downtowner” Hotel, which would accept both races.

The historic Hotel Sadler deteriorated with the rest of the west side after neglect from the city. When the hotel was destroyed by arson in the 1980s (how convenient), it was never rebuilt. Flash forward to today, and this is right where the City of Orlando plans to build the new MLS Soccer Stadium. Is there a pattern with these Venues and the disappearing history in Orlando?

Nothing seems safe in Orlando. Will we protect local history or let it fade away…with help from Buddy’s bulldozers?