You are here: Home › Transportation › Another SunRail Special Service Flop: Not Many Rode Train on Sunday 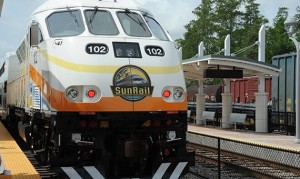 Tens of thousands of people were in downtown on Sunday, including all the fans of the Orlando City Lions celebrating opening day at the brand new MLS stadium – but not many of them decided to ride SunRail. Special weekend train service was offered for Sunday and it was another flop.

SunRail only had 2,847 total riders, or just around 1,400 round-trip riders. That’s pathetic. Many in the community have been begging for weekend SunRail service, but where are the results when the service is actually offered?

There’s nothing new to this either. SunRail’s ridership struggles even during its regular commuter operating hours during the week. Special weekend service has not yielded any better results. The special night service trains were cut out completely due to extremely low ridership. And even with the opening of a new MLS stadium and the kickoff for a new season, along with great weather and other downtown festivities, only 1,400 round-trip riders for the train.

The highest Saturday ridership for SunRail was back on November 12th of last year. Officials reported a ridership of 3,452, or about 1,725 round-trip riders. The second highest for the special weekend service was February 4th when 3,337 total riders chose SunRail as their transportation. Previous counts include:

It probably did not help that March 5th service for SunRail was officially announced on March 3rd. That’s another problem with privately funded ventures, that’s when the decision was made by the sponsors.

So, what will it take to make weekend service work for SunRail? More regular service? Better hours? More funding? What would make you or others in the community choose the train?

9 Responses to "Another SunRail Special Service Flop: Not Many Rode Train on Sunday"