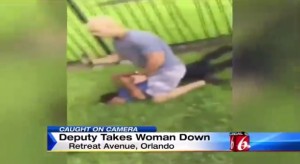 Deidra Reid was violently arrested by Orange County Deputy Richard Nye, but the State Attorney has dropped all charges saying “this case is not suitable for prosecution.” Reid plans to file a civil lawsuit.

For months, there have been calls for justice in numerous cases involving Orange County Sheriff’s Deputy Richard Nye, who is accused of excessive force and abusing his position. In fact, 21 excessive force complaints have been filed against Deputy Nye in the past seven years, including two recent cases heading toward civil lawsuits against the deputy and the Orange County Sheriff’s Office.

Last year, in a span of only two months, Deputy Nye was involved in two high-profile cases of excessive force. In July, college student Deidra Reid was violently arrested by Nye, who pulled Reid’s arm out its socket in a very controversial and seemingly personal take-down of the 21-year-old woman. Reid and her friend Reginald Lane Jr. were arrested and claimed Nye used excessive force. In September, Deputy Nye was then accused of beating a 17-year-old boy while deputies were searching for a 30-year-old suspect.

Critics have also been taking aim at Orange County Sheriff Jerry Demings regarding the controversial use of excessive force by Deputy Nye. “The first time was when he abused 20-year old, 110lb soaking wet, black female college student Deidra Reid, who now has a criminal arrest record thanks to Deputy Nye’s lies,” attorney Natalie Jackson, who represents Reid, wrote on Facebook to Sheriff Demings after the September incident. “I guess Deputy Nye has to kill someone before you give a damn?”

Just last week, Erik Sandoval with News 6 reported State Attorney Jeff Ashton dropped all criminal charges against Deidra Reid. “From the investigation which has been made, it is the opinion of the writer that this case is not suitable for prosecution,” the state attorney’s office wrote in its notice filed with the court on December 23rd.

But that does not mean the damage caused by Deputy Nye is done or that these cases of excessive force are over. “My client’s criminal case was dropped, but she should have never been arrested and abused in the first place,” attorney Jackson said. “Contrary to what many think, just because her case was dropped doesn’t mean this is over. I’m glad the criminal case is over for Deidra but I’m not happy at all about what the Orange County Sheriff’s Office, Officer Nye and Officer Parnell have conspired to do to my client, a very young college student who is just starting her life, and the long-lasting effects of what they have done to her.”

“We will be suing them all for the harms they have caused her and her parents,” attorney Jackson added. 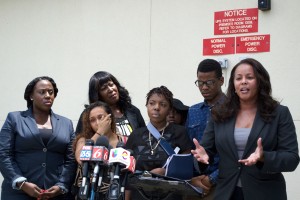 Attorney Jackson also further explained the difficulties and injuries Reid suffered as a college student that was “falsely arrested” during her class finals. The deputy dislocated her arm, causing medical bills. Reid was also wrongly jailed, a traumatizing experience for someone with no prior criminal record and she was forced to use her hard-earned money to pay a bond as well as hire lawyers to defend herself and clear her name. Her mug shot was put online and she has a public arrest record that falsely labels her as a violent criminal, when the only violence from the incident was caused by Deputy Nye. Her studies has been impacted and her reputation has been tarnished because of a personal problem Deputy Nye had with her.

“Where is the accountability?” asked Lawanna Gelzer, President of the National Action Network Central Florida chapter, who has been working with many local families impacted by police abuse and excessive force. “It is clear here in Central Florida the police cannot police themselves. The community has been demanding accountability, a zero-tolerance policy, transparency and independent Police Citizen Review Boards for far too long with no response from our elected officials.”

There are also still serious concerns about Deputy Nye’s actions against the teen accusing him of abuse in the September incident. “The force was excessive and brutal from the start,” Beth Aires with the NeJame Law, the firm representing the teen’s family, told WFTV. “They didn’t identify themselves to the individual, who was 17 years old and terrified.”

According to News 6, Orange County Sheriff Demings said at the time three deputies, including Nye, were the subject of an internal investigation to see if there was any wrongdoing. But after 21 excessive force complaints against Deputy Nye alone, it doesn’t appear Demings will be the one delivering justice or change for the victims. Demings even went so far as to demonize the victim, Deidra Reid, while defending his deputies after protests when the cellphone video went viral with students using #JusticeforDeidra on Twitter.

“It has long been clear we need new local police leadership and that change must start from the top both in the City of Orlando and Orange County unless serious change happens, and happens now,” added Gelzer. “Our work is far from done.”