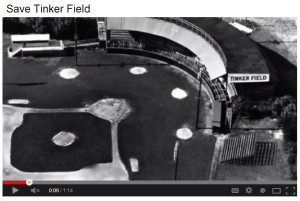 If you love Orlando history, beware of Commissioner Robert Stuart’s status quo idea for Tinker Field. It is nothing more than a nicely worded version of Buddy Dyer’s destruction plan.

After expressing a desire to help come up with a solution at the Jan. 27th City Council meeting, Commissioner Stuart wrote Mayor Dyer and the other Commissioners outlining his ideas to “preserve” historic Tinker Field. But his memo also confirms something I’ve been trying to tell people around town, that Dyer ultimately wants a parking lot on top of one of America’s oldest baseball fields and the only site where Dr. Martin Luther King, Jr. spoke publicly in Orlando.

First, Stuart proposes, like Dyer, to “relocate” Tinker Field across the street to already-existing McCracken Field and just call it Tinker Field at McCracken Park. But wait, it gets worse.

Robert Stuart then proposes, “As we complete resurfacing of the old Tinker Field, we should paint an outline of the field on the parking lot surface and include special historical markers located within parking lot.”

“Mayor, we can create a wonderful community amenity and preserve history too,” Stuart’s letter continues. What a joke, because nothing preserves history like paint on asphalt.

He also calls for renovating McCracken Field into a “working replica” whatever that means and he suggests that they may be able to create a new entrance from Tampa Avenue to the Citrus Bowl that would “commemorate” the history. Read Robert Stuart’s memo to Dyer here. Then read what Major League Baseball Manager Davey Johnson and Orlando Monarchs General Manager Mark Popkin both had to say about Tinker Field.

But all I can think of is the song lyric: “They paved paradise to put up a parking lot…”