You are here: Home › City of Orlando › More Hypocrisy Exposed as Fate of Historic Tinker Field To Be Determined Monday 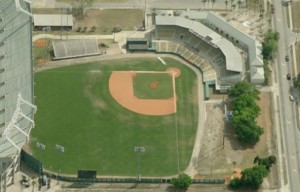 The fate of historic Tinker Field is set to be decided on Monday by the Orlando City Council according to word from City Hall. Mayor Buddy Dyer will also host a presentation on “Why the City should demolish Tinker Field” during a workshop at the Agenda Review meeting starting at 10am Monday morning. This could be a do-or-die moment for Tinker Field, which the Florida Trust for Historic Preservation named on their “11 Most Endangered Historic Sites” this year.

After the presentation, the City Council will be poised to vote to determine the fate of Tinker Field during the 2pm Council meeting. That means the main opportunity for public input on the matter will be in the morning. The public comment portion of the afternoon meeting will likely be after a vote is taken, so be sure to make your voice heard in the morning or by email or phone (see Commissioner contact list below). And while many elected officials have been claiming since January that there is nothing to be done to save Tinker Field because of the controversial Community Venues Agreement, more hypocrisy of the City of Orlando is being exposed in their actions.

If Dyer can unilaterally change the MLS soccer stadium plans, scope and location, then the City of Orlando can definitely alter the current demolition plans and preserve one of Orlando’s most historic sites (and one of America’s oldest baseball fields). That’s the truth. If the City continues to claim there is nothing that can be done, then it could be a major signal that the last-minute decision to alter the soccer stadium plan invalidates the Venues Agreement and requires an amendment with new approval and public hearings. Either Dyer broke the rules/law with his actions this week regarding the soccer stadium, or he has been lying all year about Tinker Field.

So, which is it? Bad or worse.

The reality is Dyer and his pal Commissioner Robert Stuart really want a VIP parking lot to be used for the Citrus Bowl where the historic site sits (and likely need the added revenue for their funding schemes). The City’s short-sighted plan to “move” Tinker Field across the street has also been debunked many times over and the idea was clearly never fully vetted by the City or the Venues.

Let’s also not forget some of the background that has engulfed this controversy all year long. It is already fact, on the record, that Mayor Dyer is responsible for the deterioration of historic Tinker Field. The rubber stamp City Council allowed this to happen of course, but it appears this was always part of a larger plan by Dyer. The controversy over the Mayor’s plans to destroy the historic site has lasted since news broke at the beginning of the year. Dyer’s demolition plan has critics from all walks of life here in Orange County.

City Commissioner Patty Sheehan called out Mayor Dyer’s “Tyrannical Behavior” back in February when the Mayor’s full plans were finally being discussed publicly. Back in January, County Commissioner Pete Clarke called on Orange County Mayor Teresa Jacobs to save Tinker Field, but Jacobs balked claiming she and the County were powerless despite helping fund and pass the controversial Venues Agreement allowing these plans. County Watch, a bi-partisan political watchdog group for transparency and responsibility in local government, voted and sent letters demanding Orlando alter current plans for the Citrus Bowl renovation to protect Tinker Field.

Former Major League Baseball Manager Davey Johnson even got involved and told Orlando officials to “save Tinker Field.” The General Manager of the Orlando Monarchs, the most recent baseball team to play at Tinker Field, testified on the record that baseball could still be played at the historic field even with the planned Citrus Bowl renovations. Also, many members of the public have testified on the record at public meetings, demanding action to save Tinker Field and the site where Dr. Martin Luther King, Jr. spoke in Orlando 50 years ago.