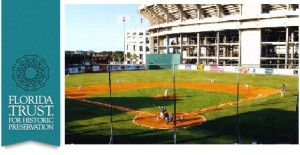 This designation is another big moment, just as Mayor Buddy Dyer and the City of Orlando continue to move forward with plans to destroy the historic field, all for a VIP parking lot. While it is never good to be on a “Most Endangered” list, this is another sign that public awareness on the issue is growing. That means the efforts to preserve Tinker Field march on, stronger than before and with some added wind behind their backs. It’s also the last thing Dyer and the City want to see as the controversy continues.

Each year, the Florida Trust for Historic Preservation announces Florida’s Eleven Most Endangered Historic Sites as part of the Annual Statewide Preservation Conference. The Most Endangered Historic Sites program is designed to increase the public’s awareness of the urgent need to save Florida’s neglected or threatened historic resources, and to empower local preservationists and preservation groups in their efforts to preserve Florida’s rich history. And this year, Tinker Field is on the list and it could prove to be another spark in the ongoing fight to save Tinker Field. From the announcement:

In use in various forms for 100 years, Tinker Field first saw use for baseball in 1914.  The first known stadium built on the site was in 1923, many major league teams called Tinker field their spring training home over the years, including the Cincinnati Reds, Brooklyn Dodgers,  Washington Senators, and Minnesota Twins.  The stadium was rebuilt again in 1963. When Griffith Stadium in Washington, D.C. was demolished, nearly 1,000 of the stadium’s seats were moved to Tinker Field, where they remain today.  The Old press box next to the home side dugout is the original press box and can be seen in photo’s as early as the 1920’s. On May 14, 2004, Tinker Field was added to the U.S. National Register of Historic Places.

One of the most historical events to take place at Tinker Field was the visit from Dr. Martin Luther King Jr in 1964. He spoke before thousands of people from the pitcher’s mound in his only visit ever to Orlando.