You are here: Home › City of Orlando › Commissioner Says Orlando “Violating Process that Protects the Citizenry from Tyrannical Behavior” 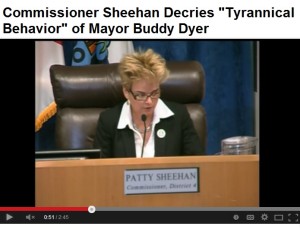 “I can’t keep going on with violating process that protects the citizenry from tyrannical behavior,” Commissioner Sheehan said. Wow.

The very unfavorable comments hit Dyer hard, as his face turned red and he looked down ahead of him as the words were read into the record. Sheehan began saying, “I have served on the City Council for 13 years and I’ve seen some good, some bad and a little ugly. I’ve been a little distressed by the ugliness of the process of two of the items today.”

Sheehan admits she, like many others around the community, was unaware of the rich and deep history of Tinker Field before the recent public uproar. “That is because there was no public input,” she explained. “The City Council found out about this plan on Thursday before the Monday vote. There was no time to post meetings for the Council to discuss this matter.”

Seeing more of the problems of Buddy Dyer’s city government? But there’s more. Sheehan also admits she is worried of “Buddy the Bully” and openly said she hopes there will be no retaliation to her constituents, citing previous instances where she feels her constituents were punished because of her vote against the Mayor.

“I am well aware of the crushing financial blows that accompany 6-to-1 votes. I’ve lost historic lighting funds for my district as well as funds for brick repair. I don’t want my constituents to pay for my political hubris.”

In the comments, Commissioner Sheehan also references See Art Orlando, a supposedly private program that now has a significant public cost associated with it, but without any public input or oversight. Sheehan blasted the “appalling lack of public input and oversight.”