You are here: Home › City of Orlando › 50th Anniversary of MLK Speech at Tinker Field 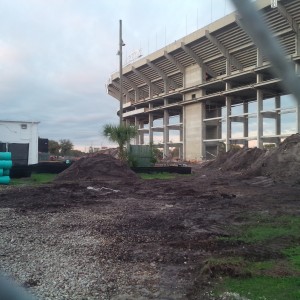 Citrus Bowl construction has torn up major parts of the field at historic Tinker Field in downtown Orlando. On the 50th anniversary of MLK’s speech, city plans remain to pave history for a parking lot.

Yesterday marked the 50th anniversary of Dr. Martin Luther King, Jr.’s speech at historic Tinker Field during King’s only visit to Orlando. I was proud to go down to Tinker Field to remember the moment. The West Orlando News coverage is a must-read, including quotes from Dr. Charlie Jean Salter who was at Tinker Field 50 years ago to witness history.

From the WON article:

“There has to be a balance between progress and preservation, not only history, but the culture and the community that identifies with downtown Orlando,” [Cantone] said. “And something that also brings in outsiders and tourists so they can see more of the identity behind Orlando, that it’s not just a tourist attraction.”

Cantone, like Head, believes Tinker Field can be saved, although he’s not confident with the current City Council. “I am not confident, but I think that the community can stand up and demand changes. This fight will dictate the changes that come in other projects down the road. So I hope the community stands up.”

This Saturday (March 8), the Southern Christian Leadership Conference will hold a press conference at 10 a.m. to remember the anniversary at God Is Able Outreach, off Church Street near John Young Parkway (2389 West Church St). The group will then march to Tinker Field.