You are here: Home › City & County Relations › More Reasons “Moving” Historic Tinker Field Is Not Acceptable & Will Not Work 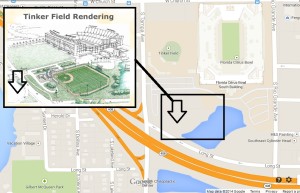 Buddy Dyer and the City of Orlando claim that “moving” historic Tinker Field across the street is necessary so the City can pave a VIP parking lot for the Citrus Bowl. However, no one in City Hall has thought this through as the plan simply will not work in addition to being unacceptable.

The controversy surrounding Tinker Field and Orlando’s disappearing history is well-known throughout the community as Mayor Buddy Dyer’s destruction of all things historic rages on. Since the Mayor’s decision to bulldoze Tinker Field and “move” the historic site across the street to pave way for a new parking lot became public knowledge, many members of the community have spoken out on the record demanding action from the County Commission, watchdog group County Watch got involved with a letter to local elected officials, and even former Major League Baseball manager Davey Johnson told Orlando to save Tinker Field. County Commissioner Pete Clarke, a deciding vote on the controversial Venues Agreement that approved the destruction of Tinker Field, has even called on Orange County Mayor Teresa Jacobs to stop the planned demolition.

But after all that, Buddy Dyer is still hell-bent to move forward with his plans to open a VIP parking lot right next to the Citrus Bowl at all costs. He along with other city leaders claim that “moving” Tinker Field across the street is a solution. City Commissioner Robert Stuart insists that a VIP parking lot for the newly renovated Citrus Bowl must happen as planned.

However, it appears no one at City Hall has actually looked into this issue before proposing it. As the photo above illustrates, “moving” Tinker Field to McCracken Field’s current location could actually cause more problems that no one has vetted, including baseballs being hit directly into traffic on the 408 Expressway. Just think of the headlines, “Death by Home Run” or “Baseball Causes Major Traffic Jam” etc.

But the fact no one at the City looked into this should not be surprising considering that Craig Borkon, a cronyism hire at the Community Venues with no college degree and no related experience, was involved in the issue. In a meeting with representatives from Saving Tinker Field, Borkon was asked if any studies have been done on the 408 E/W being so close to McCracken, and Borkon only replied saying “not that I’m aware of…” Now simply put, that means they’re either a bunch of morons or playing a charade with the public. Another reason why Borkon should resign immediately so the Venues can hire qualified professionals. 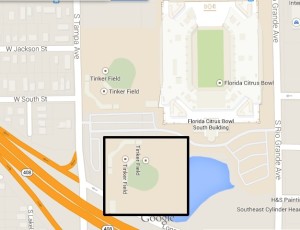 You can also kiss away the chance of minor league baseball ever returning to downtown in the new location. Simply taking a Google Map image of the location, one can easily determine that there is less space across the street, meaning a smaller field and no chance to lure baseball back to Orlando. I did a quick pull to illustrate what the same exact Tinker Field dimensions would look like after being “moved” across the street – it doesn’t fit. This means inevitably there will be a smaller field with less opportunity for the future. It also means all historic value of Tinker Field will be erased forever.

Even Mark Popkin, who served as General Manager for the Orlando Monarchs baseball team which played at Tinker Field, went on the record with the Orange County Commission saying that baseball still has a future at Tinker Field. But it will not have a future if the planned demolition and “move” happens.

And maybe that is the real plan. Today, Winter Park announced their plans to lure baseball to a new stadium they intend to build. Either way, Dyer and city officials are incompetent, not telling the truth or a mixture of both.

At the end of the day, “moving” historic Tinker Field is not acceptable – but now it is clear that Dyer’s plan also simply will not work.