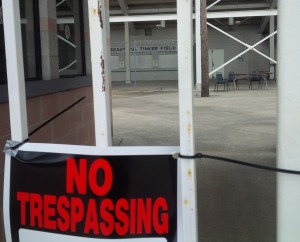 Orlando Mayor Buddy Dyer will use loaned money to demolish historic Tinker Field, pushing the city deeper into debt, after all other funding sources were ruled out. The mayor’s actions highlight the larger cost residents will pay in addition to losing a piece of history.

Dyer’s planned demolition will cost $309,500 and a purchase order was issued to Central Environmental Services on March 17th, even before the City Council’s final vote on the matter. But Dyer is not able to use any of the major funding sources for the Citrus Bowl project, making loaned funds his only option to take down the historic grandstands. Orange County ruled out the use of Tourist Development Tax dollars for the demolition and Mayor Jacobs made it clear Tinker Field was never in the scope of the County’s deal for the Citrus Bowl renovation.

According to the demolition proposal from CES, the soon-to-be-completed work will “completely remove the existing City of Orlando Tinker Field baseball complex.” But Dyer is essentially putting residents further into debt to see his plan through.

The City of Orlando has now stated their intention to use loaned money from the Sunshine State Governmental Financing Commission (SSGFC) to pay for the demolition. Dyer’s loans have put the City in debt over $115,000,000 for Dyer’s redevelopments downtown. And Mayor Dyer is claiming the Tinker Field demolition will be paid for with proceeds of the Creative Village development land, but that could take years to even start getting off the ground. Dyer put $10,000,000 of loaned money towards the Citrus Bowl renovation project as part of the city’s contribution.

So basically, Mayor Dyer is tearing down Tinker Field without paying for it. Sadly, residents will be paying off these loans, which carry variable rate interest, for the next 20 years. That’s right, twenty years.

Some of Dyer’s SSGFC debt has already starting to come due, as taxpayers had to make their first $1.8 million payment this year. This year’s $1.8 million payment is telling for what taxpayers can expect over the next two decades. The City apparently paid off the $1.8 million due with an “internal loan fund.” This means the City was able to make its payment this year by using more loaned money. The City is also responsible for interest, costing taxpayers even more money. Perhaps this debt is another reason why the City Council was forced to raise property taxes on residents by 17%?

But the specific $50,000,000 loan Dyer is dipping into to demolish Tinker Field will start coming due in ten years, costing taxpayers millions more each year in payments through 2035. Residents will need to brace for larger debt payments in the years to come. In just five years, taxpayers will owe SSGFC more than $9,000,000 in 2020. Starting in 2025, the City will owe SSGFC $9 million every year until 2035 according to the official payment schedule.

Only Buddy Dyer could have brought one of Orlando’s most historic sites into this financial mess. Is it really worth it? WFTV Channel 9 also reported the news about the City using money from a loan to demolish Tinker Field.

Making everything worse, it is clear Mayor Dyer planned the demolition scheme years ago with his staff despite the public never being told until it was too late. It now makes sense why public records confirmed Mayor Dyer was responsible for Tinker Field’s deterioration over the last several years. Realistically, this also means the other City Commissioners and County Commissioners should have been aware of the deal they reviewed, vetted and ultimately approved and oversaw. The Commissioners were all at the ground breaking photo opportunities, but it seems no one wanted to take their role seriously in understanding what the plan really was all along.

Another lesson of the Tinker Field tragedy is the lack of transparency and accountability from the local elected officials and the lack of honest dialogue with residents before and during the process, all of this, is costing our community – more than we think.

MORE articles on Tinker Field’s history and the ongoing controversy