Orlando Mayor Buddy Dyer’s secret debt is about to come due, meaning the City’s finances are in even more trouble than we think going into this year’s budget hearings. This month, the City Council will be discussing Orlando’s $52 million budget crisis and will have to vote on increasing taxes, cutting public services and an across-the-board 4.5% cut for every city department.

But something the City Council has not discussed publicly is Mayor Dyer’s $115,740,000 debt with the Sunshine State Governmental Financing Commission (SSGFC). Dyer used $100 million of the loaned money to pay the City’s share for the controversial Community Venues, including the Amway Center, Dr. Phillips Center for the Performing Arts, Citrus Bowl and proposed new Major League Soccer stadium, among other things. Dyer also paid off old debt with new debt from these loans in a nice trick of “balancing” city finances. Mayor Dyer’s financial mess has been years in the making.

And while the City Council will raise taxes and cut services to balance the budget, Dyer’s fiscal mismanagement is going to cause problems for future budgets over the next 20 years. According to the SSGFC Combined Payments Schedule, which was obtained from public records, Dyer’s debt is coming due at a high price tag for local taxpayers and residents. 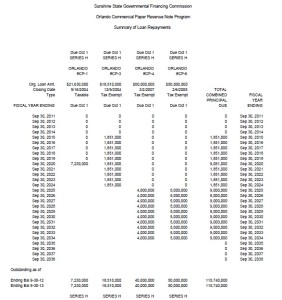 This is another reason why it is inaccurate for Mayor Dyer to try to claim the Venues projects and his reckless spending have no impact on the city budget or raising of taxes. The City Commissioners are also responsible for serving as a rubber stamp and failing at providing proper oversight and accountability. Now it is time for the Commissioners to act, and question the Mayor and his finances.

If the City Council is about to raise taxes and cut services based on the current financial situation, what will happen over the next five years as the strain on budgets becomes worse? What about in ten years when just this piece of Dyer’s debt to SSGFC will cost taxpayers $9 million every year?

But here’s where it gets even worse. Mayor Dyer’s loaned money carries variable rate interest that the City owes every year. The fiscal year 2015 expected debt service payments to SSGFC, also obtained through public records requests, include an additional $2,314,800 in interest payments on the four current outstanding loans. That means the City is paying a total of $4,165,800 on Dyer’s debt in 2015. According to city records, Dyer intends to use the CRA and Venues budgets to pay for $1.8 million of the interest, and will attempt to use the city’s “internal loan fund” to cover $2.2 million of principal and interest debt.

The City of Orlando will hold the first public budget hearing on Monday, September 8th, at 5:01pm to adopt a new proposed millage rate and tentative budget of the City of Orlando for Fiscal Year (FY) 2014/2015. It’s time for city leaders to have a serious and honest conversation with the community. It’s time for City Council to address serious financial issues during the budget hearings and upcoming process.

But I’m not holding my breath.

One Response to "Orlando Finances in More Trouble: Buddy Dyer’s Debt Comes Due"