You are here: Home › City & County Relations › What Will Dyer Do? County Says No Tourist Tax Dollars for Tinker Field Demolition 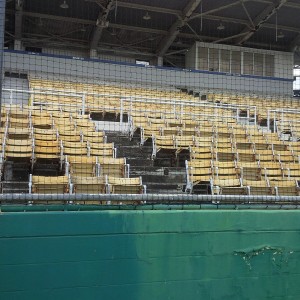 Historic Tinker Field continues to be trouble for Orlando Mayor Buddy Dyer. There are already growing questions about Dyer’s years long plan to demolish the historic site, but a new problem is emerging as Orange County is going on the record stating no tourist tax development dollars (TDT) will be used for the demolition of the historic grandstands. With a $300,000 demolition planned, this could become Dyer’s biggest problem in his attempt to clear the site.

The City of Orlando has intended to use the Citrus Bowl renovation budget to finance the demolition of historic Tinker Field all along, but Dyer is not legally allowed to use CRA funds (city tax dollar contribution) as the site is outside the legal boundary. The news seems to mean at the very least, another public vote and allocation of funds will need to take place before any demolition is conducted and the City of Orlando needs to find a funding source for the demolition.

So how does Mayor Dyer intend to pay for the demolition of the historic grandstands? The City has already issued a purchase order for $309,500 to Central Environmental Services, Inc. But if Dyer is not legally allowed to use CRA funds, and Orange County is now stating definitively TDT funds will not be used, the historic grandstands may still have a chance for survival a little longer.

City Commissioner Tony Ortiz stated in a phone conversation he was a little confused during the historic designation ordinance discussion with all the talk of demolition. Commissioner Ortiz stated the City Council has never voted to allocate funding for the demolition and had never been previously quoted about the cost.

But Dyer and the Orlando Venues are already in trouble and both have questions to answer regarding the use of funds for the Citrus Bowl project. According to the Orange County Mayor’s office, tourist tax dollars were only to be used for construction costs of the venues.

“FYI, the City can only use TDT funds for construction costs of the venues (Amway Center, Dr. Phillips Center for the Performing Arts, MLS stadium, Citrus Bowl). Therefore, knowing that TDT revenues are not being used for the Tinker Field demolition, this venue is the City’s facility, located within the city limits,” Jacobs’ assistant added in the email.

But, under Dyer’s direction the Tinker Field demolition has been part of the City’s planning and spending since at least 2013. In fact, the CES demolition proposal references site visits in 2013, 2014 and 2015. This is all further proof that under Dyer’s supervision, the Venues already was spending Citrus Bowl renovation funds outside of the scope of the approved project and outside the scope of construction of the approved community venues.

Perhaps this is why Mayor Dyer and the Orlando Venues have been attempting to rush the demolition of the historic site?