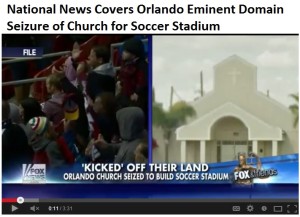 Fox News is now covering the ongoing eminent domain battle in Orlando, where Mayor Buddy Dyer is in the process of seizing a local Parramore church to build a soccer stadium. While I admit, I’m not the biggest Fox News fan and don’t always catch their reports, Orlando is getting some national news coverage that can’t make Dyer, Orange County Mayor Teresa Jacobs or the MLS very happy. Under headlines like “Kicked Off Their Land” and “Seized for a Stadium,” Orlando was just blasted nationally in the “God versus Soccer” fiasco.

Fox News Senior Judicial Analyst Judge Andrew Napolitano rips Florida Circuit Judge Patricia Doherty’s recent eminent domain decision, clearing the way for “Bulldozer Buddy” to take what he wants in the name of corporate welfare and Major League Soccer. Napolitano doesn’t get all the facts straight, as this technically will be a city-owned stadium, it is just being built as a gift for the new MLS soccer team by the city, will be maintained by the City and the team is lining up to keep all sales taxes generated at the stadium (team also already is promised all the “naming rights” on this “public” stadium). It is accurate to say the only reason this stadium is being built in our community is because of the soccer team.

Judge Napolitano also had words about Mayor Dyer’s offer of $1.5 million to the Church for the land, saying “It’s obviously worth many times $1.5 million.” The recent court ruling was for two additional land parcels in the needed area for the stadium, and the local Church will still need to go to court to fight the city over how much the city must pay to take the land.

It is also the latest black eye for the soon-to-be Orlando MLS team responsible for the latest destruction of Parramore, Orlando’s historic African-American neighborhood, where the stadium will be located. Dyer is also facing major criticism over his plans to demolish historic Tinker Field, one of America’s oldest baseball fields and the location where Dr. Martin Luther King Jr. spoke in 1964.