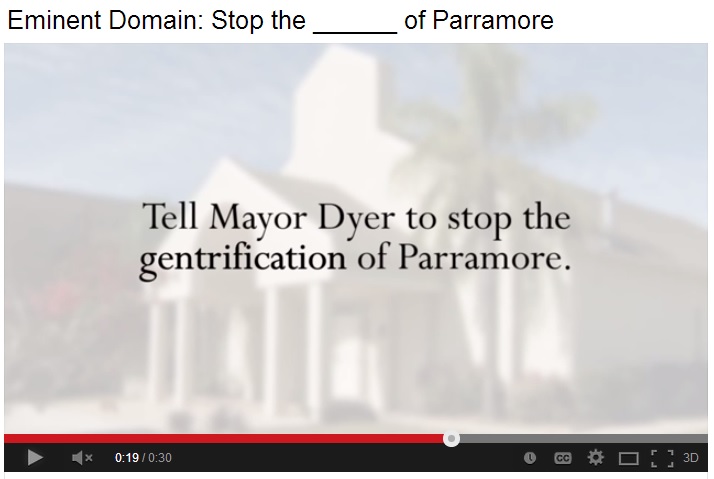 This was never how eminent domain was supposed to be used. To build a soccer stadium on someone’s private property, destroying a local church of all things?! Seriously?

But that’s exactly what Orlando Mayor Buddy Dyer is doing. The City of Orlando plans to take Faith Deliverance Temple located on W Church Street in historic Parramore so they can build a free stadium for the Orlando City Soccer team when they join the MLS. Don’t forget though, this was always part of Dyer’s deal with the MLS to get the stadium built in Parramore.

Eminent Domain is the inherent power of the state to seize a citizen’s private property or rights in private property, without the owner’s consent. The property is taken either for government use or by delegation to third parties who will devote it to “public use.” The most common uses of property taken by eminent domain are public utilities, highways, and railroads. NOT A SOCCER STADIUM!!

But don’t expect any City Commissioners like Daisy Lynum, who represents Parramore, to object because Daisy skipped the agenda review meeting this morning. Don’t expect Commissioners Sam Ings, Patty Sheehan, Tony Ortiz, Jim Gray or Robert Stuart to demand even a discussion on the issue. The eminent domain matter was placed on the “consent agenda” by Dyer so there would be no debate.

Of course, this was always part of Dyer’s deal for the millionaire soccer team owners. Orange County Mayor Teresa Jacobs and County Commissioners Pete Clarke, Jennifer Thompson, Scott Boyd and Tiffany Moore-Russell (who sold out her own community on this vote) also share in the blame as they championed this insider deal. Local news outlets like the Orlando Sentinel also share blame for their hypocrisy in covering the soccer stadium deal. And, even the Orlando City Soccer team and Major League Soccer must accept their responsibility in the destruction of Orlando’s historic African-American community, what a start to their local team legacy.

Enough is enough. Stop the use of eminent domain in Orlando for corporate welfare projects like the soccer stadium. Stop the gentrification of historic Parramore!