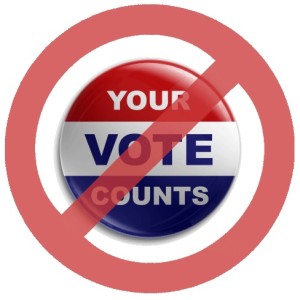 On Monday, City Commissioners will vote on an ordinance to move Orlando’s municipal election date from next April (2016) to November of this year, just months away. This move follows Mayor Buddy Dyer’s desire to move the election up by five months, but it could be setting up the City Council to violate residents’ rights and act as voter suppression preventing young Orlando residents from participating in the electoral process.

With everything going on in Baltimore and around the nation, now more than ever it is clear our political system needs more youth engagement, more youth involvement and more participation. The upcoming vote by the City Council will send the opposite message to Orlando’s youth.

By moving the election up five months, the City Council will prevent current students and young residents who would have been eligible to vote in April of next year, but will now not be able to vote. After the City Council’s first vote, the Fight Back Coalition and National Action Network Central Florida Chapter teamed up to launch a new youth initiative in wake of the possible civil rights violation and to encourage voter registration and participation.

Already, three youth have stepped forward concerned with the City Council’s last-minute election proposal with little public discussion. Arkia Daniels, Zaria Kee and Hashiem Johnson, Jr. all will turn 18, the legal age to vote, in December and January meaning they will no longer be able to vote in their own city’s election if the City Council approves the election date change. These youth are also pre-registered to vote and ready to participate in their local process. Now the National Action Network Central Florida Chapter youth movement is organizing with students as the word spreads and more youth are becoming aware and concerned about their rights. New sign ups are increasing with the latest efforts.

The City Council will essentially be telling Orlando youth, your vote doesn’t count, your voice doesn’t matter. The Mayor and City Council are telling Orlando youth, wait four more years until you participate in shaping your city’s future. For some of these youth, after years of gentrification and Orlando’s low wages, they may not have four more years to wait.

By definition, voter suppression is a strategy to influence the outcome of an election by discouraging or preventing people from exercising the right to vote. Buddy Dyer and the incumbent City Commissioners are about to vote on an ordinance that will prevent and discourage Orlando youth from exercising their right to vote. They are willing to move up the municipal elections by five months in order to preserve their political careers, even if it means sacrificing the right to vote for Orlando’s youth.

Commissioners Patty Sheehan, Regina Hill, Tony Ortiz, Sam Ings and Jim Gray all voted for the first reading of the election date change. Only Commissioner Robert Stuart voted against the ordinance and he warned the City Council to research and take more time to study the matter and determine the best path and date before moving forward.

Sheehan, Ings and Ortiz will all be on the ballot and now have the decision to violate the rights of the youth they claim they want to serve and represent or to change their previous vote and find a different solution.

Because Mayor Dyer stalled on making any decisions or public discussions on the election crisis earlier in the year, it was understood the Orlando election would take place in April 2016. This was long known to be problematic because the state legislature ultimately did move the Presidential Primary to March 2016, raising concerns about Orlando’s election proximity from the Orange County Supervisor of Elections. The rushed election timeline would also put stress on Dyer’s newly appointed City Clerk Celeste Brown, who serves as the municipal elections supervisor by City code. The outgoing Clerk, Alana Brenner, faced several controversies in recent years including a different possible civil rights violation during the last municipal elections.

Moving the election date this drastically is a violation of the 26th Amendment for these young residents, who expected to vote in their first municipal election next year. The Twenty-Sixth Amendment states “The right of citizens of the United States, who are eighteen years of age or older, to vote shall not be denied or abridged by the United States or by any State on account of age.”

Dyer and the City Council had many options that did not include radically moving the election date to just a few months from now. Supervisor of Elections Bill Cowles has stated the City could move the municipal election to March 15, 2016 and hold it simultaneously with the Presidential Primary. This option would increase voter turnout and seemed to be the preferred option of the Supervisor of Elections.

But the City could also move the election date back two weeks in April 2016 and avoid the concerns from the Supervisor of Elections. That would have kept the April stand-alone election and would not have shifted election time tables drastically.

In either of those scenarios, Arkia, Zaria and Hashiem would still be able to exercise their right to vote in their local community. With everything happening in America right now, we need to be doing everything we can in our own community to make sure everyone is involved and engaged. It’s important to create a system locally to allow all voices to be heard in our political process.

Arkia, Zaria, Hashiem, their friends and fellow students all deserve nothing less than their right to vote in Orlando’s elections.