You are here: Home › City of Orlando › City Hall’s Downtown Outlook Provides Glimpse of Orlando by the Numbers 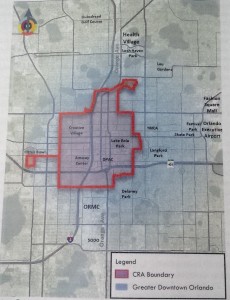 Yesterday, the Orlando City Council voted on the sixth amendment to the Downtown Orlando Community Redevelopment Area Plan, which officials claim will “formulate the next chapter of Downtown Orlando’s evolution.” The plan – dubbed the DTOutlook – was prepared by Renaissance Planning and includes an ambitious, but quite frankly somewhat unrealistic, vision for downtown’s future over the next decade. After all, in November WFTV News exposed part of this “vision” process after the City was caught using input from kids under the age of 12 for such an important study to shape the future of downtown.

But the introduction of the DTOutlook report breaks down current city facts and figures and offers a glimpse of downtown Orlando by the numbers before the latest transformation efforts begin. While the focus of the DTOutlook Plan is the Community Redevelopment Agency (CRA) boundary, the report included “greater downtown Orlando” in order to tell a larger narrative and likely to include both major hospital hubs in the jobs figures.

According to the report, 46,482 people live in the “greater downtown Orlando” area, while 96,711 jobs are located in the same area. This means more than twice as many people work here than live here. More than 30,000 of greater downtown Orlando’s jobs are in healthcare and social assistance fields, emphasizing the importance of both Orlando Regional Medical Center and Florida Hospital to the city’s economic health.

Greater downtown Orlando is a changing place, with changing communities and residents. The DTOultook explained greater downtown is largely made up of smaller households, as single-person households account for 46.3% of downtown’s housing. Only 17% of all households in greater downtown have children under the age of 18 based on the report, although 37% of households are considered families by blood or marriage living together.

Almost two-thirds of all occupied housing units in downtown Orlando are renters (63.9%). Further illustrating the transient nature of renters, 30.3% of all renters in Orlando moved into their current housing units after 2010 according to the numbers. One in five housing units in greater Orlando are in large multi-family buildings with 50 or more units. However, in the Redevelopment Area, 55.5% of units are in 50+ multi-family buildings, emphasizing the higher density housing. So who makes up these residents?

Young residents who fall into the city’s millennial target range of 25-34 years old make up more than 21% of greater downtown residents. On the other end of the scale, residents 65 and up only make up 13.6% of the population.

The median household income in greater downtown Orlando is around $43,982. While 18% of households are expected to make over $100,000/year, a whopping 31% of downtown households have a median income under $25,000/year. Orlando has long been criticized for consistently ranking as the lowest paying metropolitan area in America.

But in the DTOutlook plan, the City touts a well-educated downtown population, referencing around 43% of adults holding a Bachelor’s degree or higher education. The City claims 72% of downtown residents work in white collar jobs. However, the college degree attainment rate does trail the two established high-tech centers in America, and also trails Tampa across I-4. Tampa’s average median household income downtown is also higher than Orlando.

The report states that greater downtown remains racially diverse. Nearly three-fourths (73%) of the population identify as white, 18% as black and 3% as Asian. Almost 6% of residents identify themselves as other races or multiple races. The DTOutlook notes Hispanics may be any race and estimates 13.3% of the downtown population are people of Hispanic origin.

In the redevelopment area downtown, the City added only 3,100 new housing between 2000-2010, but these figures are expected to at least double in the 2010s. With all the construction, there’s no doubt the City efforts here are in full swing.