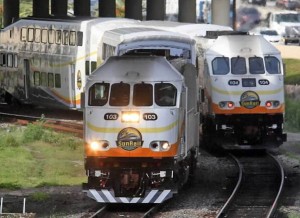 Central Florida’s SunRail remains stuck in a summer ridership slump, even despite all the I-4 Ultimate construction. In fact, the noticeable drop in ridership this year began when Orlando Mayor Buddy Dyer and Orange County Mayor Teresa Jacobs delivered public speeches essentially begging the community to ride the train. It turns out no one was paying attention to them.

It is beyond clear that something is not working with SunRail (actually, many things are not working). As more excuses are made to the public about poor management, bad scheduling and the fact local politicians not being realistic about Central Florida transportation solutions, the public perception of SunRail continues to worsen. It’s bad when even loyal SunRail riders are being ignored despite offering great ideas on how to improve the rail service.

According to the May 2016 SunRail Conductor’s Report, the average daily ridership last month was only 3,393 boardings, or roughly 1,700 riders taking the train round-trip. Those numbers are significantly lower than the same month’s SunRail ridership just one year ago. SunRail sold a whopping two annual passes in the month of May this year, along with 570 monthly passes and 309 weekly passes. At the time, SunRail also announced a new initiative to identify opportunities to serve special events in advance and identify potential funding opportunities. Once again, those plans went unrealized and ridership throughout the summer continued to struggle.

According to the Florida Department of Transportation, the June 2016 SunRail Conductor’s Report showed a daily average of 3,582 total boardings a day, or just under 1,800 round-trip riders. While up slightly from May’s drop, the June 2016 ridership is once again below the same month’s SunRail ridership from one year ago. Officials were able to actually sell 4 annual passes in June, but only along with 557 monthly passes and 258 weekly passes. FDOT did run 10 special trains, as opposed to 36 trains during regular service, on Sunday, June 19th for the Pulse candlelight vigil at Lake Eola.

The summer ridership slump kept going right into July. According to the July 2016 Conductor’s Report, there were only a total of 3,501 total daily boardings last month. Last year in July, SunRail was close to 4,000 daily boardings in comparison. Only one annual pass was purchased last month, along with 535 monthly passes and 242 weekly passes, a decrease in all counts from June.

Despite the mayors’ pleas earlier this year, SunRail ridership actually dropped in the month of April to 3,427 total riders per day, close to where the ridership count remains this summer. The month before both Mayors asked the community to ride SunRail, 3,839 total riders, or just over 1,900 round-trip commuters, were riding the train. The ridership numbers for SunRail have never been strong, but the fact they remain extremely weak is concerning.

The ridership data along with the ticketing information indicates the commuter line is still not attracting regular riders. FDOT officials also confirmed last week that there are no additional or weekend service scheduled at this time.