You are here: Home › Transportation › After Mayors’ Pleas, Stunning Drop in SunRail Ridership 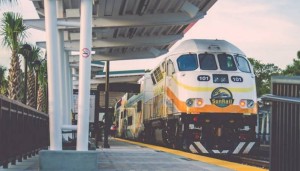 Ahead of SunRail’s second anniversary of service, there was much fanfare and hype around the commuter train. Orlando Mayor Buddy Dyer pitched SunRail during last month’s State of the City address and even gave out free tickets to community leaders in the audience, basically begging them to “try” riding the commuter train in April. Orange County Mayor Teresa Jacobs also made a similar plea during her State of the County address last month.

Despite the mayors’ pleas, SunRail ridership actually dropped in the month of April.

According to the April Conductor’s Report, SunRail only had an average of 3,427 total riders per day, or about 1,700 round-trip commuters each day. Those ridership counts are among the lowest averages for the train service. There is also a big drop in April ridership compared to March. The month before both Mayors asked the community to ride SunRail, 3,839 total riders, or just over 1,900 round-trip commuters, were on trains each day according to the March Conductor’s Report. April’s ridership is even lower than February levels

It appears no one was paying attention to Dyer or Jacobs.

In the month of April, SunRail only sold one annual pass. One. SunRail sold 543 monthly passes and 226 weekly passes last month.

The Florida Department of Transportation and SunRail officials continue to look forward despite the ongoing ridership struggles. In April, FDOT broke ground on SunRail’s Phase 2, the first expansion for the train service. Phase 2 South will offer another 17.2 miles of commuter rail service between the Sand Lake Road station and the Poinciana station. The expansion will include the construction of four new stations.

“We’re looking at the projected opening day ridership at about 2,000 boardings per day, on day one, and that’s only projected to grow,” said Noranne Downs, FDOT District Five Regional Secretary. “It just means a better opportunity for people to have more choices.”

Only adding another 1,000 daily round-trip commuters will not be enough to change the public perception problems surrounding SunRail. Perhaps that is why FDOT is already laying the groundwork for SunRail’s Phase 3, a 5.5-mile extension to Orlando International Airport’s $470 million intermodal transportation center.

Back in February, some SunRail riders predicted the looming drop. “The ‘new’ schedule will cause some of the regular commuters I have ridden with since the beginning to now drive to work,” Jeanne Johnson wrote on this site. “They will be getting into town either way too early (less time with their families) or too late (unhappy employers). We asked the question as to ‘why’ the schedule would have to change and the marketing person and conductors did not have an answer. Might make it easier to swallow if we knew the ‘why’ to the changes.”

“The schedule is a wreck,” wrote Rev. Col. Kenneth D. Frazier, “too much time waiting for another train in many cases.” He also noted the lack of night and weekend service, a common complaint from potential riders.

8 Responses to "After Mayors’ Pleas, Stunning Drop in SunRail Ridership"