You are here: Home › City of Orlando › Orlando Historical Landmark or Liquor Bar? 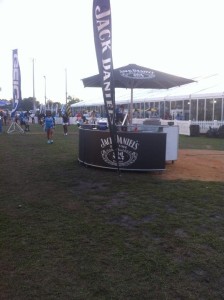 Just months after receiving official designation as an Orlando historical landmark by the City Council, Tinker Field was degraded into a liquor bar and bathroom during this year’s bowl games. On the historic pitcher’s mound, the exact site where Dr. Martin Luther King, Jr. spoke in his only visit to Orlando, city officials set up a Jack Daniel’s liquor bar while portable toilets lined the third base line of the protected infield diamond. It’s still unclear if this is an improvement from last year’s bowl games where historic Tinker Field was used as a parking lot.

Is this makeshift bar creating a place where people can learn about Tinker Field’s 100 years of cultural history? Is a Jack Daniel’s liquor bar the City of Orlando’s way of highlighting the history of the pitcher’s mound where Dr. Martin Luther King, Jr. spoke? The 50th anniversary of MLK’s Tinker Field speech from the pitcher’s mound was marked in March 2014.

Other City Commissioners also chimed in last year before voting for the Tinker Field historical landmark ordinance. Commissioner Regina Hill took credit and claimed the historic field would be “saved” by the ordinance. She even stated her efforts led to protecting more than the infield diamond and pitcher’s mound, including the entire field.

“I truly believe, and it pains me, that I have, along with the Council, saved Tinker Field,” Commissioner Hill said during the March 23, 2015 vote. “I recall it was only originally the mound, the diamond. Well now we’ve extended it to over six acres.”

Is a liquor bar really the historic preservation Commissioner Sheehan believes in?

So is this the latest example of historic preservation by neglect in Orlando?