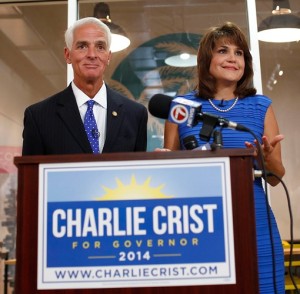 A new poll indicates a lingering problem for Charlie Crist and his political positions: negative reactions among African-American, Hispanic and female Democratic and Independent voters. The poll is also another strong indication that Democratic voters deserve a primary debate between Senator Nan Rich and Charlie Crist. The survey conducted by leading national pollster Voter Consumer Research revealed Florida’s Democratic and Independent voters demonstrated negative reactions towards former Republican Florida Governor Crist’s political positions prior to the his conversion to seek the Democratic nomination. The poll was taken on behalf of Tezlyn Figaro Communications Group.

The survey was conducted in late June and sampled 900 Florida voters. The research looked primarily at three key populations of Florida’s voting public that will be very influential in the outcome of the upcoming primary and general election: African-Americans, Hispanics, and women under 45 years of age. When asked about their choice between Rick Scott and Charlie Crist, each group registered serious concerns about Charlie Crist’s record.

“Whether it is healthcare, education funding, criminal punishment, environmental management, or trustworthiness, Charlie Crist has an uphill battle to win the hearts and minds of communities that have won statewide elections for Democrats in recent years,” stated Tezlyn Figaro, President of Tezlyn Figaro Communication Group. “We felt it was important to see what the fastest growing and underserved communities were thinking about important issues and how that would impact the election. What we found was a vast majority of African-American, Hispanic and female voters have significant concerns about important policy positions that the former Governor Crist actually voted on when he was a Republican opposed to his new political position, which he has not voted on since Crist was an Independent and now a Democrat. Simply put, it appears voters will need to be convinced by Crist that he will do as he promises opposed to his record in the past.”

This could all spell more trouble for Crist as he attempts to navigate the Democratic primary without debating Senator Nan Rich. Rich has called for debates, yet Crist continues to reject a Democratic debate on the issues and records of the two candidates. Based upon the respondent’s negative reaction towards Crist’s positions, it is clear that the respondents would simply prefer to vote ‘no’ against Governor Scott opposed to a ‘yes’ vote for Charlie Crist if he makes it to the general election. Although Charlie Crist switched political parties, it may not have any bearing on the outcome of the race. The reaction of the respondents becomes more negative when voters were asked directly about Crist’s record and political positions before he switched parties.

The poll showed a negative response in respect to budget cuts Crist made in education and healthcare. For example, when respondents were asked directly about Governor Charlie Crist cutting millions of dollars from programs dealing with child abuse and mental health, all three audiences responded negatively (African-Americans (75%), Hispanics (75%), and Women (83%)). The negative trend continues when asked about issues on fighting crime, gun control, and other important issues in the minority communities. For example, Hispanic voters (72%) and African-American voters (72%) had a strong negative reaction to Crist’s budget cuts in funding affordable housing programs. Both African-Americans (66%) and Hispanics (67%) also had a negative reaction to his record on funding cuts for programs to fight gang violence.

The survey results also show Crist is vulnerable in his positions on environmental and fiscal issues, specifically his position regarding off shore drilling, his support of a federal sales tax and his support for tax breaks for the oil industry.