You are here: Home › City of Orlando › Dyer’s Eminent Domain Against Parramore Church Covered by ESPN 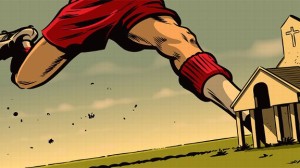 The ongoing controversy has halted stadium progress and continues to make national news. ESPN The Magazine’s July 21 Body Issue highlights the matter, raising the stakes once again on the eminent domain case. The column echoes a lot of tough points and truth. Catherine Williams, the widow of the original pastor, conveys the community sentiment that the City of Orlando just doesn’t care about them or the real situation happening in Parramore, saying “They just want to throw us out.”

The article goes even further about the attempted use of eminent domain:

Officials justify the use of eminent domain by arguing that stadiums bring jobs, tourism and revenue to the surrounding community. Never mind that those benefits are almost always overstated, according to economists.

Before it can take the church’s land, Orlando must convince the judge that the stadium is a public project — that it isn’t just transferring property from one private owner to another, glitzier one. This is a tricky point of contention: Although the city will own the stadium, the soccer club will lease and develop it, reaping ticket sales for itself.

Mayor Dyer and the City  of Orlando have attempted to intimidate and bully Faith Deliverance Temple throughout this entire process, as they have done to others. But the church did not back down. Instead, they have retained Brigham Property Rights Law Firm and Shannon Keith Turner, P.A. to defend the church’s property rights against the City.

Dyer’s controversial use of eminent domain has already made national news on several occasions. The Washington Post called Dyer’s eminent domain “likely illegal” and a “terrible idea.” Fox News blasted the City of Orlando nationally with headlines like “Kicked Off Their Land” and “Seized for a Stadium” in their “God versus Soccer coverage. Gentrification concerns related to the MLS stadium first reached ESPN national coverage of Orlando last year.

Without the church’s parcel of land, the city will not be able to build the soccer stadium.