You are here: Home › Elections › 2014 August Elections: Know the Democrats Running in Orange 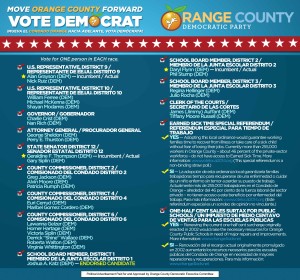 Local elections are just around the corner for Orange County voters. While Republican Mayor Teresa Jacobs escaped unchallenged because Val Demings dropped out of the race and the Democratic Party could not field another challenger, there still are some important decisions to be made on August 26, 2014. There’s also the very important primary for Governor between lifelong Democrat Nan Rich and Republican-turned-Independent-turned-Democrat Charlie Crist, who still refuses a debate with Nan Rich.

In the 2014 August elections, the Orange County Democratic Executive Committee only has one endorsed candidate – School Board candidate Joshua Katz running in District 1. Katz has also gone viral with his Tedx Talk on the toxic culture of education with over 50,000 views. This is a must-win for local Democrats against incumbent Joie Cadle.

Here’s a quick recap of all the Democratic candidates running in the August 2014 elections and a link to their campaign websites. Check out the Democrats running for office this year before voting:

FYI: WFTV ran a story this week about questions over those funding the push for Orange County sales tax extension for schools (big developers who will benefit directly).