You are here: Home › Transportation › More About Future Gambling in Orange County as All Aboard Florida Controversy Continues 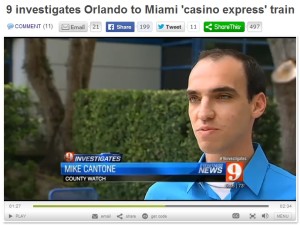 As opposition continues building in counties down the Florida coast between Orlando and Miami, the controversial All Aboard Florida proposal is also getting more scrutiny from media. WFTV Channel 9 Investigates exposed more details about the “casino express” high-speed train project. The excellent report connects a lot of dots and further illustrates that this train will only benefit the casino interests. I branded AAF as the Casino Express back in 2012 when I first began looking into the proposal, but now many more details are becoming public confirming the links between the railroad and the casinos. WFTV lays out many of them in their investigative report, which does include a little of my commentary. From the WFTV report:

“It will usher travelers and their tourist tax dollars right out of Orlando.” Mike Cantone of County Watch says there are too many coincidences between the train and the casinos. “These projects are lining up to be too perfect for the developers as well as the gamblers.”

With the push to legalize gambling increasing in the state legislature and Governor’s office, AAF would provide a direct, high-speed route to pull Central Florida tourists and business travelers directly to the future South Florida casinos (and the Miami beaches). And for those saying locally it is nothing to worry about as Orange County or Orlando should just legalize resort-style casinos too, there are some major local hurdles to overcome.

WFTV’s Christopher Heath also reported that Orlando airport leaders wrote an internal memo stating: “The tourism industry has been exceedingly concerned that the railroad is a front for gambling.”

Disney’s opposition to casino gambling in Florida is well-known. Likely because of that, the Central Florida Partnership, a wing of the local Chamber of Commerce, voted to endorse the “No Casinos in Florida” campaign.  During the 2014 legislative session, the Florida Chamber of Commerce also listed opposition to casino-style gambling as a top priority. This means some of the most powerful business and tourism interests in Orange County (and many of the big political donors to local elected officials) have made it clear where they stand in the debate.

But it will also take a lot more than just “passing a law” locally to allow gambling to become a reality in Orange County even if the state legislature takes action to legalize it statewide. In fact, according to Section 107 of the Orange County Charter, before casino gambling may be allowed anywhere in Orange County, a countywide public referendum separate and apart from any statewide or multi-county referendum on gambling will be required. The Charter goes further stating that if the local referendum is disapproved by voters, it may not be offered to the electorate more frequently than once in any two-year period.

That raises the stakes on any future local gambling referendum and makes a difficult task even harder to achieve, especially considering the interests already lined up ready to oppose it. And that’s another reason why there should be more concern locally about the All Aboard Florida “Casino Express” and what impact it may have on our tourism industry.

Here’s the full version of Section 107, “Casino Gambling,” from the Orange County Charter:

A. Reservation of Power by the Electorate. The citizens of Orange county reserve to themselves the power to approve or disapprove casino gambling of any nature within the boundaries of the county. Therefore, if and when casino gambling becomes lawful under the Constitution and laws of the State of Florida, no action may be taken by the Board of County Commissioners, by the governing body of any municipality, or by any elected or appointed official or employee of either the county or any municipality the effect of which is to authorize, to approve, or in any manner to allow casino gambling to occur anywhere in the county unless and until casino gambling in the county is first authorized by an approving vote of a majority of the qualified electors residing in the county and voting on the question at referendum, and such referendum must be separate and apart from any statewide or multicounty referendum on the question.

B. Definition. For purpose of this section, “casino gambling” means playing or engaging in any game of skill or chance for money or any other thing of value, regardless of how such game is named, labeled, or otherwise characterized, which game of skill or chance, when played for money or other thing of value, was unlawful under the Constitution or laws of the State of Florida as of July 1, 1995.

C. Referendum. At any primary, special, or general election, the Board of County Commissioners may offer to the electorate, and upon a petition from the governing body of a municipality in the county, the Board shall offer as soon as practical to the electorate, the question of whether casino gambling shall be authorized in the county. Upon approval of the question at referendum, the county and any municipality may thereafter allow casino gambling to the extent lawful under the Constitution and laws of the State of Florida, and at the option of the Board this section may then be deleted from this Charter. If the question is disapproved at referendum, it may be offered to the electorate again from time to time, but in no case more frequently than once in any period of 24 months.

D. Enforcement. The restrictions in this section may be enforced by the county, by any municipality in the county, or by any person substantially affected by any violation thereof.

E. Municipal Referenda Not Prohibited. Nothing in this section prohibits any municipality in the county, whether by charter or municipal ordinance, from likewise requiring approval by its voters at referendum before casino gambling may be allowed within the boundaries of the municipality, but any such referendum requirement shall be in addition to, not in substitution of, the referendum approval required by subsection A.