You are here: Home › Florida › Community Opposition to All Aboard Florida Continues to Grow 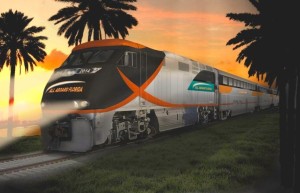 Even as All Aboard Florida got mentioned by Orange County Mayor Teresa Jacobs in today’s “State of the County” address, the billion dollar high-speed rail line continues to face major community opposition which could threaten the whole project.

Just this week, the St. Lucie County Commission approved a plan for crafting a resolution opposing All Aboard Florida, according to WPTV. It is now expected that two resolutions – one listing the County’s reasons for opposing AAF and another supporting public comment on a federal report forthcoming on the environmental impact of the project – will be on the June 6th agenda. One St. Lucie Commissioner, Chris Dzadovsky, said “Too many challenges, too many problems and not in the best interest for St. Lucie County,” while the County Commission Vice Chair Paula Lewis said “Quite honestly, I haven’t heard anything that benefits St. Lucie County.”

Last week, a Brevard County Commissioner told All Aboard Florida to “quit smoking crack,” as he believed AAF was fabricating a study. Brevard Commissioner Andy Anderson said that the proposed AAF rail service was “the worst one I’ve ever seen as far as fabrication and spin.”

All Aboard Florida is also keeping mum about Treasure Coast concerns of speed and noise. Mass Transit Magazine reported that Treasure Coast residents have been concerned about the trains’ speeds and the sound level of the train horns. And in Martin County, boaters have demanded to know how long the new trains will keep the single-track St. Lucie River train bridge down, making vessels wait. AAF officials decided not to attend the March meeting and won’t comment until the Federal Rail Administration report comes out later this month.

Even Democratic U.S. Congressman Patrick Murphy attended and spoke about his concerns about All Aboard Florida, which he has taken to U.S. Transportation Secretary Anthony Foxx as well. Rep. Murphy told the packed room “There is no vote in Congress for this. The Department of Transportation gets funds allocated for this and goes and makes loans.” AAF currently is applying for federal loans.

Here locally, there should also be more concern that All Aboard Florida could very well turn into the Casino Express ushering travelers and money right out of Orlando. But there are many other reasons to question the proposed All Aboard Florida project and I will be covering them more in an ongoing series.