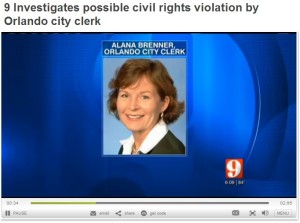 Orlando City Clerk Alana Brenner has found herself in the middle of another controversy that questions the integrity of her office. WFTV Channel 9 Investigates uncovered big news about a possible civil rights violation by City Clerk Brenner. This is just the latest controversial action by the City Clerk, who is a political appointee of Mayor Buddy Dyer.

During this year’s city elections, Alana Brenner requested to have a poll worker removed for expressing his opinion. Mr. Scarbourgh was in fact removed and according to the WFTV report, he is still concerned about retaliation from the City. He told Channel 9 News, “I have to be careful about what I say, the last time I said something, I got in trouble.”

While Brenner refuses to comment on her actions to WFTV, Orange County Supervisor of Elections Bill Cowles, who actually is independently elected unlike the city clerk, was quick to react.

“I feel sorry for him to feel that way. He should be able to express himself,” said Orange County Supervisor of Elections Bill Cowles.

Cowles said the city clerk asked him to move Scarbourgh out of the District 5 polling place and he complied with the city’s wishes since it was the city’s election.

“I think free speech is what everyone expects to have, and this is probably a unique situation we found ourselves in with this one,” Cowles said.

The Fight Back Coalition and the National Action Network Central Florida Chapter are taking the civil rights allegations very seriously while exploring all options to consider in light of the news. Mr. and Mrs. Scarbourgh are very active in the community and are also involved with Fight Back Coalition.

The two organizations are also teaming together and demanding action be taken. In light of the new civil rights violation allegations, here’s what must be done:

1. City Clerk Alana Brenner must take a leave of absence or be suspended with pay pending an investigation.

2. An independent investigation must be conducted to uncover all the facts behind the decision of the city clerk, who was involved and the possible civil rights violations.

3. Alana Brenner should consider resigning for the integrity of the clerk’s office. She could do the right thing and step aside, taking accountability for her actions and opening the door to larger reform in our City Clerk’s office for the public.

It’s not the first questionable action by Alana Brenner either. The City Clerk is nothing more than a political tool of Mayor Dyer and that has jeopardized all credibility and integrity of the Clerk’s office. City Clerk Brenner also uses her authority very selectively, and when politically convenient.

For instance, during this year’s city council race in District 5, there was a lot of controversy around the residency of candidate Juan Lynum. Juan of course is the son of former City Commissioner Daisy Lynum who was one of Mayor Dyer’s top allies on the Council. However, Alana Brenner took no action, refused to investigate and even claimed she had no authority to act. Yet, in 2010, Alana Brenner used her office to investigate and disqualify Vibert White, who ran against Daisy Lynum, for not adequately proving his residency.

Also, in 2012 before the city elections, Alana Brenner was asked to review and investigate absentee ballot requests that were being harvested by political operatives and faxed in bulk from one phone number of the operative Sandra Lewis. There were many questions regarding violations of the law, but Alana Brenner refused to take any action or review. She instead continued with her plan to mail out all absentee ballots despite the questions.

Later in the 2012 election, Alana Brenner used her authority to personally select city employees to handle, open, sort and tabulate the absentee ballots, while on the clock for their City positions. Far from an unbiased team like the Supervisor of Elections office provides for all other elections. All of this is also part of the ongoing election complaint against the City of Orlando, Mayor Dyer and Alana Brenner. She did the same thing in the 2014 elections, but Supervisor Cowles’ office must be growing concerned as this year the SOE made Alana Brenner and all the City employees sign a document swearing they would uphold all Florida election laws.

Alana Brenner also personally involves herself in every public records requests and staff responses to the public as a control mechanism of the Mayor’s office. Sometimes, her meddling actually disrupts the public records process which her staff would have otherwise handled adequately. Her involvement also typically slows the process and delays information and records from being provided, allowing time for her to report to Dyer perhaps? The Records Departments at the City of Orlando is great, it’s unfortunate the political appointee of the mayor feels the need to be in the middle of it all and raise questionable motives to what and how information is provided to the public and media. I also was told that a city staffer could not even take my call because I had to email it through Alana Brenner to get a response from him or his department (it was a basic yes or no question too). Brenner will also charge large amounts of money to discourage citizens from fulfilling their public records requests – and be sure to count the copies you are paying for, as she is known to include duplicate pages to increase the fee.

The list could go on. Now, it appears City Clerk Alana Brenner has used her position to commit a civil rights violation. It is time for some action and reform in Orlando.