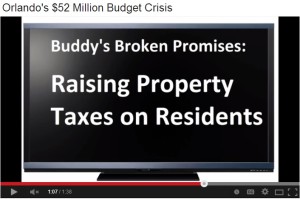 The City of Orlando is finally admitting they have a problem: a $52 million budget gap. Mayor Buddy Dyer’s years of mismanagement and out of control spending have finally reached a level the City can no longer deny. And as bad as this budget crisis is, these numbers do not include Dyer’s secret debt that he has used to finance the Venues and other spending projects. Buddy has over $115 million in variable rate interest loans with the Sunshine State Government Finance Commission and those loans and interest payments are structured to not have any payments for several more years.

Just wait until it is time to add those bills and interest payments to the budget mix. $100 million of that loaned money was for the Venues projects too. So we can’t even afford what Dyer continues to push and he knew it all along.

This budget crisis has serious ramifications for Orlando. Buddy Dyer and the City Council are looking into raising property taxes on residents, cutting more city services to the public, adding or increasing “fees” (more taxes), and instituting a 5% across the board cut. And last year, the City had to dip into $29 million of reserves to balance the budget and the City already made $41 million in cuts. This debt and fiscal mismanagement will be crippling to the local budget for years.

That’s the sad thing. This is not a “new” problem, it’s just so big now it can no longer be kept a secret by Dyer or the Council. I started warning about this financial crisis in 2012 and even attempted to sit down with news outlets in town including the Orlando Sentinel to provide them documentation and evidence of the looming crisis, but of course it was an election year for their “buddy” and they didn’t even want to hear about it. In fact, back then Buddy Dyer went on the record saying he would not raise property taxes (but he also denied a financial crisis too).

Orlando has serious financial problems thanks to Buddy Dyer and the current City Council. That means first things first, the Mayor and Commissioners should immediately return the pay raises they voted themselves. No one deserves a pay raise after driving our City into this kind of financial crisis. And then the City could get rid of all the overpaid, under-qualified cronyism hires wasting our tax dollars. With this financial mess, it’s also probably not the best idea to be wasting money taking a local Parramore church to court for eminent domain. Have we all forgotten that in just a few years, local governments have to pay for SunRail?

So, Buddy Dyer, “if you ain’t got no money take your broke ass home!“