You are here: Home › Transportation › Is SunRail Set Up to Fail? 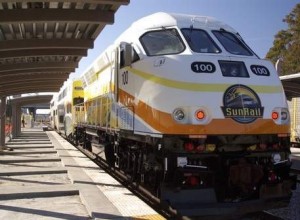 As SunRail prepares to officially begin service on May 1, many questions around its potential success or failure remain. But one thing is sure, people need to let go of the idea that SunRail is a mega transportation solution or magical fix for Central Florida and Orlando, as Mayors Dyer and Jacobs claim. It’s not. In a way, SunRail is similar to one new, fancy Lynx bus line. So, is SunRail being set up to fail?

First, let’s look at the extremely low predicted ridership. According to SunRail’s own website, “about 4,300 passenger trips per day” are predicted for the initial 31-mile rail service. Which means, only 2,150 actual people are expected to ride SunRail initially, considering most will be taking return trips not one-way tickets. See the trick they use there? And don’t expect that number to jump any time soon, Federal Transit Administration predicts ridership will escalate to 7,400 trips (3,700 people) by 2030. In a metropolitan area with more than 3 million people, that’s pathetic.

At the beginning of service, prepare for more deception on the numbers. SunRail is offering free passenger service, so initial numbers won’t reflect reality. Also, the City of Orlando gave the Orlando Regional Chamber of Commerce $92,000 of taxpayer dollars to buy SunRail tickets and make it look like there is local demand. Even more public funds were shuffled to the Chamber for SunRail when the Orlando Community Redevelopment Agency gave another $50,000 to “promote SunRail.” The Chamber has purchased thousands of tickets with these public funds already, inflating sales numbers.

In fact, all the major business players in town are in on the game. The Orlando Regional Realtor Association, Orlando Magic, and other businesses known to show up on elected officials’ campaign contribution disclosures, have all made “bulk purchases” of SunRail passes. As of February, SunRail only had $17,250 in orders from 25 businesses and government agencies that have bought passes. But again more deception, as most of these “purchases” have been for reloadable SunCards, which have no credit on them, and will resell for $5 each. Another nice trick.

Second, SunRail’s schedule proves the lack of demand and interest. When service begins, SunRail trains will run every 30 minutes during rush hour and every 2 hours during off-peak times, with the last train out of downtown running around 9:30pm. There will be no weekend service (no money for that). This is literally a commuter train, and nothing more. The schedule is also problematic if any passenger plans on grabbing a drink or bite to eat after work – will people be willing to miss their train if they have to wait 2 hours in downtown Orlando for the next train? What if someone misses the last 9pm train home for the night?

At least the Florida Department of Transportation planned ahead though. FDOT said they have done analysis to increase service to every 15 minutes during peak times and every hour during off-peak times, “However, that’s not expected to happen for at least 20 years or more.”

Third, SunRail also has the potential to negatively impact current transportation issues with its budget busting costs as well as future mass transportation projects by angering the public and fueling its critics with failure. The low ridership and horrible schedule are big problems but SunRail will also make 54 street crossings along the way, interrupting Central Florida’s notorious traffic flow even more. As if the current red-light patterns in Orlando weren’t bad enough, this is going to drive people crazy. Some Florida Hospital nurses are complaining that the test service has impacted their short commute from downtown, adding frustrations already.

In fact, just yesterday at Colonial and Garland, cars had smashed right through the safety gate and were stopped on the track. I witnessed a SunRail test train forced to stop because it couldn’t get through. Minutes after the train finally snaked through traffic, a broken gate raised, almost as an ominous sign of what’s to come when Orlando drivers clash with the train.

Guess what will annoy downtown residents and workers even more? CSX trains are still going to be using the tracks, but because of SunRail, CSX freight trains will now run through downtown Orlando in the middle of the night, like 3am, ensuring a good night’s sleep for all those new residential units being built downtown.

There is also a major problem for local workers — there is no East-West route for SunRail! SunRail is going to become a major competitor for local transportation funds for decades to come and will likely end up hurting Lynx funding for increased bus service and east-west routes that workers need. It is very likely that SunRail will end up hurting future Lynx funding. Local leaders jumped right over one major problem (bus funding) and launched SunRail without any local plans to fund the rail service or the bus service so desperately needed. Another one of those, “hey look, a new shiny object” moments? 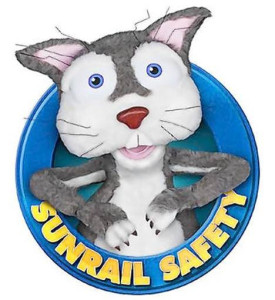 Finally, even the SunRail “Safety Squirrel” mascot looks like he’s struggling and we haven’t even gotten started. I’m not sure if the SunRail squirrel is recovering from drugs or if he was just hit by a train…but as a lover of squirrels personally, not even this expensive consultant-produced mascot is a good sign for SunRail.

In just a few years, SunRail will become a local issue, as the state hands over control and expenses. Yet Dyer, Jacobs and the others have no set plans for funding. It’s almost like local leaders don’t realize the impact any SunRail failure or setback will have on all future mass transportation proposals, including future expansions of rail. With all the money that has been thrown at the train and corporate sponsors like the Chamber of Commerce, SunRail seems to be set up to fail.

5 Responses to "Is SunRail Set Up to Fail?"