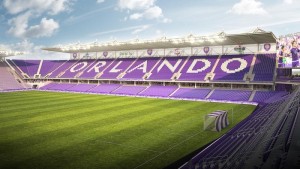 Despite today’s City Council vote, a temporary injunction was filed against the City of Orlando attempting to stop the sale of required land for the controversial downtown Major League Soccer stadium. The complaint for injunction relief was filed in state court and asks for a full judicial hearing to prevent the sale of city land based on Florida statutes governing properties seized by eminent domain. The plaintiffs are suing the City of Orlando in violation of FL statute 73.013, which governs covenants of properties taken by eminent domain.

“This is about principle,” said plaintiff Betty Gelzer, longtime Parramore business owner, Parramore homeowner and President of the Inner City Neighborhood Association. “This is about doing things the right way and making sure our city government is representing the interests of our entire community. Everyone should be held accountable to the law.”

The potential illegality of the pending sale stems from the previous eminent domain actions taken by Mayor Buddy Dyer to acquire the land in question as he hastily attempted to force the Parramore location for the new MLS stadium. In his rush to stop the ongoing bleeding caused by his numerous blunders, Dyer forgot the ramifications of his prior use of eminent domain to acquire the stadium site. As many will recall, Faith Deliverance Temple in Parramore stood up to the Mayor and forced the City of Orlando to ultimately drop their eminent domain case against the church. However, Mayor Dyer did seize other land surrounding Faith Deliverance Temple by eminent domain while he was trying to intimidate the church into selling their land for the soccer stadium.

In January 2014, Circuit Judge Patricia Doherty ruled in favor of the City of Orlando in the first eminent domain case for land next to the church and the City was ordered to deposit more than $3 million as an estimate of the parcels’ value. With these properties, Dyer hastily made the decision to close Parramore Avenue and shift the stadium location to avoid an actual court case against Faith Deliverance Temple, which attorneys predicted would favor the church in the first real test of Florida’s new eminent domain laws.

At the time of the eminent domain seizures, City of Orlando spokeswoman Cassandra Lafser told Law360 in an interview, “The public purpose was confirmed by the court, and the city was awarded the two properties located at 639 West Church St. and 607 West Church St.” The stadium is planned to be built right on top of the 639 West Church Street property, among other city parcels, even after the proposed shifting of the site. The city also demolished a warehouse that stood on the land in question to prepare the site for construction.

With the planned shifting of the stadium site location, Dyer and soccer team officials also proclaimed the MLS stadium would be privately funded and owned in a victory for taxpayers. But that also presented a major legal issue for the city and soccer team. Florida Statute 73, which governs eminent domain, reads in part (emphasis mine):

(1) Notwithstanding any other provision of law, including any charter provision, ordinance, statute, or special law, if the state, any political subdivision as defined in s. 1.01(8), or any other entity to which the power of eminent domain is delegated files a petition of condemnation on or after the effective date of this section regarding a parcel of real property in this state, ownership or control of property acquired pursuant to such petition may not be conveyed by the condemning authority or any other entity to a natural person or private entity, by lease or otherwise,

There is no legal way for Buddy Dyer to promise the City of Orlando will sell – or lease – the Parramore land designated for the new soccer stadium to the team after he used eminent domain. Florida Statute Chapter 73 governs eminent domain and goes on to state:

(f) Without restriction, after public notice and competitive bidding unless otherwise provided by general law, if less than 10 years have elapsed since the condemning authority acquired title to the property and the following conditions are met:

2. The owner from whom the property was taken by eminent domain is given the opportunity to repurchase the property at the price that he or she received from the condemning authority;

“This was originally a public venue, but when the Mayor could not get what he wanted, Buddy Dyer denied the rights of the citizens and residents of Parramore and threw out the proper process in order to force this stadium through,” said Lawanna Gelzer, another plaintiff on the complaint for injunction relief. “This entire stadium process has been nothing more than another example of political bullying and corporate welfare at its worst.”

Other plaintiffs include the Peabo Child Care Center located just blocks away from the proposed stadium site, the Racial and Social Justice Alliance and the Women of Color Leadership Coalition. Parramore residents and business owners have not ruled out taking further legal action for damages should the project continue. The filing of the temporary injunction was simply the first response to the city’s action being taken today.

“Even though city officials know they are breaking the laws on the books, they don’t seem to care,” Gelzer said. “Their actions caused this and now they must be held accountable like everyone else.”

The Parramore location has always been the center of the controversy surrounding the new Orlando MLS stadium. The location is being used as part of Mayor Dyer’s larger gentrification of Orlando’s historic African-American neighborhood. All along, the location has been problematic causing headaches for the team, fans and local area residents. Even the city’s own maps show the planned stadium location clearly divides the Parramore community. The City of Orlando also closed Parramore Avenue, the area’s main thoroughfare, to accommodate the need to shift the location without conducting traffic impact studies or holding public meetings to inform residents.

Because of Dyer’s reckless and hasty actions leading up to this point, there are still serious legal hurdles further complicating this entire project. The contract approved by the City Council provides for 10 days in case of any legal actions related to the matter.

“The people want their day in court,” Gelzer added.