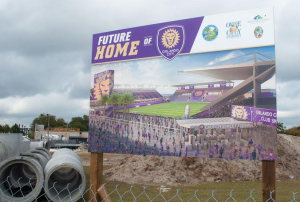 The City of Orlando has officially closed a significant portion of Parramore Avenue, the core of the city’s historic African-American community, in order to clear the way for the new Major League Soccer stadium. However, city leaders continue to hastily push through Mayor Buddy Dyer’s controversial stadium even without a traffic impact study.

Community members, including myself, have been requesting traffic impact studies for Parramore Avenue since August 2014. At one point, City Clerk Alana Brenner responded to an official public records response by stating “the City is not sure what you mean by the use of the term ‘impact studies.'” It was either a bad attempt at city officials playing dumb or an equally bad attempt to stall, delay or deflect scrutiny when they did not want to release something.

When Mayor Dyer was questioned by WFTV Channel 9 News yesterday about the closure, the only response he could come up with was to reference an old study done for the Amway Center in a completely different area. The mayor claims he will “update” the same old Amway plan for the new soccer stadium area, meaning no impact study will ever really be conducted. And what would it even matter now that the City has permanently closed the Parramore community’s thoroughfare?

WFTV found many residents concerned about the permanent closure and changes to the local history and character of the community. Channel 9 also found once again Commissioner Regina Hill, who is leading a task force help preserve Parramore history to make up for taking away the historic street, would still not answer any phone calls or emails.

Mayor Dyer and the City Commissioners are aware of what is really going on. The City Council is responsible for continuing the gentrification of Orlando’s historic African-American neighborhood. The closure of Parramore Avenue will have a major impact on the area and a devastating impact on the adjacent neighborhood. The City’s own Downtown Development Board website describes the Parramore Avenue location by stating: “The Parramore Business District consists of two historic retail ‘Main Streets’ – Parramore Avenue and West Church Street.  These two streets intersect in the Parramore Town Center, which covers the traditional commercial and industrial heart of Parramore along the Church Street and Central Boulevard corridors.”

The new proposed location for the stadium will also take up land where the historic Carver Theatre was supposed be revamped. Mayor Dyer and the City of Orlando had given nearly one million dollars to the BBIF to rebuild the historic site, but the money vanished and the city later purchased the land back from the organization at an inflated price to build the soccer stadium.

The City was forced to move the proposed location of the soccer stadium when Mayor Dyer lost his attempted eminent domain takeover of Faith Deliverance Temple, a church that has been part of the Parramore community for decades. Now Dyer is pushing forward a new plan to construct the MLS stadium right next door to the church, forcing the closure of Parramore Avenue.

The City Council passed the ordinance permanently closing Parramore Avenue and parts of Pine Street on February 9th. There was no discussion from City Commissioners. Parramore business owner Lawanna Gelzer spoke out against the City Council’s agenda to change Parramore Avenue. Gelzer delivered three passionate responses on behalf of her community as the Council passed three needed ordinances to allow construction to continue. She seemed to get under the skin of Mayor Dyer as she declared “hands up for Parramore” and called out Commissioners for taking such actions during Black History Month.

Lawanna Gelzer Speaks Out Against Changes to the Parramore Community (YouTube)