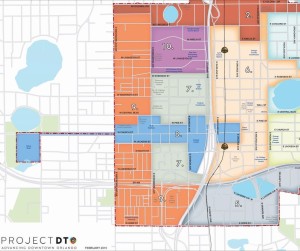 According to the City of Orlando Project DTO map, the new blue “sports and entertainment” district cuts right into what the City labels the Parramore Heritage Neighborhood.

The division and further destruction of the Parramore community was outlined visually for the first time in an official map during a presentation by Project DTO at City Hall, an appointed committee of Mayor Buddy Dyer. The map further illustrates the gentrification efforts of Mayor Dyer and the City of Orlando in the area as they push through controversial redevelopment after years of neglect.

The current depiction of the Parramore neighborhood is also a far cry from how the City of Orlando has historically described the area. In fact, even the 2014 Parramore Comprehensive Neighborhood Plan detailed the boundaries of Parramore by stating “the area is bounded by Colonial Drive to the north, Hughey Avenue to the east, Gore Street to the south, and Orange Blossom Trail to the west.” Now, what little remains of the historic African-American community keeps being pushed further west.

Making matters worse, the new map details how Dyer’s proposed shift of the location for the soccer stadium directly divides the Parramore community in two. According to the map, the blue “sports and entertainment” district cuts right into what the City of Orlando labels the Parramore Heritage Neighborhood.

The closure of Parramore Avenue will have a devastating impact on the adjacent neighborhood, but the clear splitting of Parramore with Dyer’s new sports development will cripple Orlando’s historic African-American community. The planned controversial Creative Village development by Craig Ustler, an active appointee of Dyer on Project DTO, will continue to push and price current elderly and minority residents out of the city’s downtown core. Parramore residents and business owners continue to fight in a local campaign to Stop Creative Village and Save Parramore. All more pieces in the sad destruction of Orlando’s historic Parramore community.

Not included in the Project DTO presentation was information about how Faith Deliverance Temple fits into the “sports & entertainment” district that will soon divide Parramore. Mayor Dyer lost his attempted eminent domain takeover of Faith Deliverance Temple, a church that has been part of the Parramore community for decades. The church will now sit right next door to the planned MLS stadium.

It is now clear beyond doubt that the MLS stadium will serve as the final wedge into the Parramore community as the next step in the gentrification process, which will eventually lead to the ultimate destruction of the historic community if the current plans move forward.

The Project DTO meeting was held at City Hall on February 16th and covered a wide variety of important city issues. The next Project DTO advisory committee meeting will be Monday, March 2nd at 2:00pm at City Hall.

From the Project DTO February 2015 presentation at City Hall: