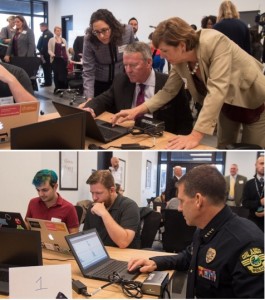 The Orlando Police Department’s 2015 Year in Review provided some troubling statistics related to public safety in the City Beautiful. While there were minor gains being made in some categories of crime statistics, violent crimes increased, with murders doubling across the city from 2014 to 2015. Sex offenses and aggravated assaults also increased throughout Orlando, according to OPD’s data. Overall, OPD reported 392,915 calls for police service last year.

Chief John Mina reported there were nearly 15,000 arrests and about 63,000 traffic stops in 2015, with more than 1,400 violent felony arrests. Almost 600 crime gun were recovered last year, up 10% from 2014. Violence towards police was down in 2015, in one piece of positive news, but OPD officers were still shot at on five separate occasions. Chief Mina also reported there were 234 assaults on law enforcement officers.

While Chief Mina announced overall crime rates decreased by 1.28%, the murder rate in Orlando doubled, with 32 murders last year. There were more murders in Orlando in 2015 than there were over the last five years, according to OPD’s presentation. Sex offenses increased by 13% while aggravated assaults increased by more than 17.5% in 2015. There were almost 200 reported sex offenses and 1,800 aggravated assaults last year.

There were more than 16,000 reported property crimes, but overall that number is actually a slight improvement from 2014, with property crimes decreasing 2.7% in 2015. However, there were still more than 2,300 residential burglaries last year. Motor vehicle theft increased by 20% in 2015, which could be a reason OPD recently launched a controversial “Operation Lock Up” program that irritated some residents.

Orlando police body cameras were also discussed in Chief Mina’s Year in Review presentation. OPD admitted that only 100 officers are expected to have body cameras in 2016, far from the 450 first responders the City of Orlando says will ultimately be equipped with body cameras and only twice as many body cameras than there are right now. OPD was awarded a federal grant of nearly $500,000 for body cameras, but it does not appear Mayor Buddy Dyer or the City Council are providing additional resources to put body cameras on all officers.

That update once again contradicts what Mayor Dyer told the Orlando Sentinel during his re-election campaign last year. “One of the things that we have done in this year’s budget is we have provided funding for body cams, which will make every officer interaction with our residents more accountable and accessible,” Mayor Dyer told the Orlando Sentinel last year. “I think that is truly important because a lot of times what happens in police incidents is you get the last thirty seconds of an incident and a lot has transpired before that. So I think it’s pretty important that we deploy body cams.” Apparently, it is not a priority for the Mayor or the City of Orlando to do this quickly.

According to OPD’s data, officers used force more than 500 times and Chief Mina said four officers were fired because of excessive force in 2015. Orlando police brutality and excessive force remains one of the most controversial issues in some communities, with many lawsuits being settled and more being filed against OPD.

Chief Mina also detailed many trainings for local officers, including how to deal with handcuffed prisoners, de-escalation and assessment during resistance, alternatives to arrest in certain situations, shoot/no shoot decision-based training as well as fair and impartial policing. OPD also participated in an ethical and civil rights refresher training conducted by the FBI. Orlando police also held a joint FBI exercise in 2015 at Mall at Millenia for active shooter situations. 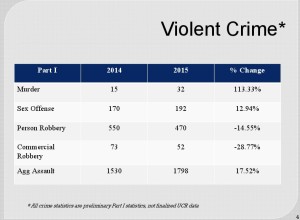 “My top priority is the safety of our community and working with our residents and businesses to keep Orlando a safe place to live, work and play,” said Mayor Dyer.

Based on OPD’s 2015 Year in Review presentation and data, it appears there is still much work to be done in Orlando in regards to public safety.

“The men and women of the Orlando Police Department are committed to providing the very best services possible, treating people with dignity and respect, and living up to our motto of courage, pride and commitment,” said Chief Mina.