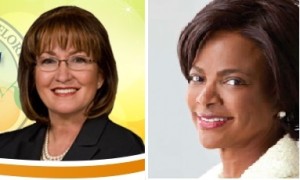 For months, there have been questions about Demings’ campaign for Mayor but she sure did raise a lot of money and spent a lot of money on her campaign staff and consultants, clearly with little to show for it now.

Back in January, I wrote about a secret Democratic redistricting effort being pushed by Debbie Wasserman Schultz and other high-ranking officials with the Democratic Party, that indicated Val Demings’ run for County Mayor was simply a back-up option. That redistricting effort is currently moving forward. There are also new rumors swirling that Demings could possibly team up with Charlie Crist as a potential Lt. Governor nominee. But all that signals that Demings was never serious or genuine in her bid for County Mayor — and now her decision has left local Democrats in turmoil ahead of the important August elections.

However, the Demings family has also continued to be active, with Val attending events and meetings as a candidate this past week. And just 11 days ago, Demings sat down with West Orlando News for an exclusive interview where the candidate finally went in-depth on the reasons behind her run for Mayor as well as important local issues. Demings explained, “I thought that running for Orange County Mayor would be something where I could really have a hands-on opportunity to make change in my community. In making that decision, I talked to lots of people, met with many different groups, prayed about it, discussed it with my family and of course had their blessings and their support, and ultimately chose to run for Orange County Mayor.”

Oh how much can change in just a few days.

Meanwhile, Mayor Jacobs made it clear this afternoon she intends to move forward full-steam ahead. She is rolling to re-election. In a statement after the Demings announcement, Mayor Jacobs said:

“However, this election is not over.  Notwithstanding Ms. Deming’s announcement, my campaign will continue to move forward full steam ahead, focused on the issues that are important for Orange County.  It is invigorating to be on the campaign trail discussing the issues with our citizens and voters.  We’ve made great progress in the last three years, and look forward to continuing that good work.  I strongly encourage everyone to cast their ballot on August 26th.”

Sounds like Mayor Jacobs is in control and feeling good while her opposition are scrambling without a plan. Evidence of that can be found in the statement issued from Carlos Smith, Chair of the Orange County Democrats local party (DEC). Smith issued an embarrassing statement lacking any substance hours after the news broke. We’re now just months away from what Carlos Smith (and Scott Randolph, the “man behind the curtain” for Carlos) told local Democrats would be the most important election for our party as they campaigned for control of the party and this is all they had to say:

“Orange County’s Democratic Party Chair Carlos Smith released the following statement in response to the announcement: We applaud Val Demings for her longstanding commitment to the citizens in our community and her dedication to public service. The news of her decision to drop out is surprising, but we respect her decision to do so and trust that it was the right one. Val Demings is a rock star in the eyes of the Democratic Party with a very promising future and she is destined to do great things for the people of Florida.”

It is clear the Democratic “leadership” was not informed of this decision if Demings’ biggest supporters were caught surprised, now with egg on their face. Carlos and the DEC have invested thousands of dollars from party resources in addition to all the staff and volunteers they directed towards this race all for nothing. But hey, Val is a “rock star” so it’s all good, right? Forget the fact the local DEC is in shambles.

To say this is a blunder and mess for the local Democratic “leadership” is an understatement. So at the end of the day, Demings is out, Jacobs is cruising to re-election, and the local Orange County Democrats are left in turmoil once again.