By now, most are aware of Mayor Dyer and Mayor Jacobs fast-tracking a new soccer stadium proposal, spending millions of public tax dollars which will only lead to the further gentrification of historic Parramore. In fact, a diverse bi-partisan coalition has also emerged to challenge our leaders who seem only focused on appeasing their corporate political donors.

ESPN naturally is covering the issue from a soccer perspective, but I was very pleased when they reached out to me for comment on this deal being proposed by Orange County and the city of Orlando. Here’s my quote from the ESPN article:

But opponents to the project are beginning to emerge. Mike Cantone is a former Orlando mayoral candidate and is part of a bipartisan organization called the Timeout Coalition, which is opposed to the project on a variety of levels. Cantone expressed concern about whether the tax money would be better spent on the Orlando Convention Center or on some of the area’s hotels, a view shared by the area’s hotel industry. He finds the proposed stadium site problematic as well. The location sits in the Parramore neighborhood near downtown, and Cantone is concerned that building the stadium will lead to complete gentrification of an area that has long comprised one of the poorer sections of the city.

“We’ve seen how [Parramore] has been left behind on every other venue project including the Citrus Bowl and the Amway Center,” he said in a telephone interview. “We don’t want that to happen again.

“Our city is so maxed out on spending. We have so many other problems, including affordable housing, a jobs shortage in these neighborhoods, as well as a budget problem, that we don’t’ think this is the best priority right now for our city.”

It was sad to see Mayor Jacobs seemingly lie about her “concerns” only to ignore the community she is elected to serve. All that really matters is very clear now: the wishes of Jacobs’ new corporate donors who will push her own selfish ambition over the best interest of the community.

In fact, Mayor Jacobs still has never visited the actual Parramore neighborhood even though her office is just blocks away. When challenged, her chief of staff took her to the Coalition of the Homeless. Shows what Orange County leadership really thinks of the people of Parramore, huh? 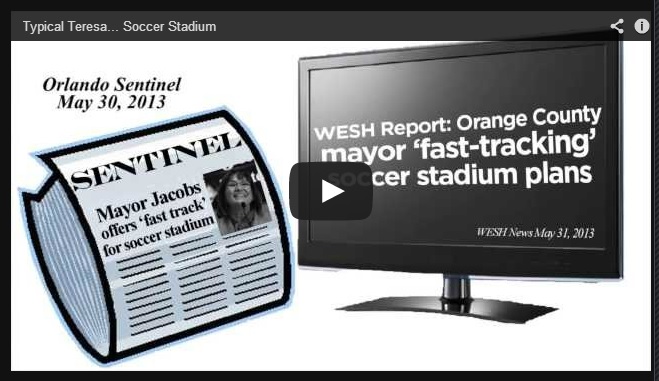