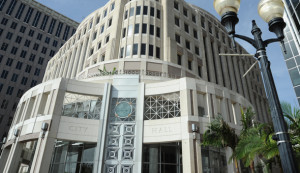 A Dyer administration cover-up related to a $175,000 city asset continues to deepen as the story coming from Orlando City Hall becomes more convoluted. According to newly obtained records, city officials violated policies and procedures defined by its own Risk Management department in the aftermath of the destruction of the falloffstone sculpture.

For more than two and a half years, Mayor Buddy Dyer’s administration has claimed the “missing” art sculpture had been stolen. City public art coordinator Paul Wenzel filed a police report in November 2012 claiming, “it was discovered vandalism had occurred” to the $175,000 sculpture by himself and Jason Klotz of Property Control. The incident was labeled as “criminal mischief” by the Orlando police report, but no investigation was conducted and no other police reports were ever filed on the case, according to records provided by the City of Orlando.

But when confronted last week with new information obtained exclusively by myself, Dyer’s top city officials finally changed their long-held story about what happened to this mysterious missing sculpture. City officials were now admitting to me the sculpture was in fact damaged by a city employee, not stolen by “metal thief” as claimed for more than two years.

“In response to your specific questions, the City did not file an insurance claim because after further investigation by the City’s risk management department, it was determined that the sculpture had been damaged by a City employee who was instructed to clean up the area where it had been stored,” Dyer spokesperson Cassandra Lafser stated by email.

However, the Dyer administration cover-up deepens as the City of Orlando Risk Management Department violated its own policies and procedures raising serious questions about the entire incident and apparent ongoing cover-up. In Section 440.4 of the City of Orlando Risk Management Policies and Procedures Manual, “determination of responsibility for damage shall be made on the principle that damage is chargeable when the employee could reasonably be expected to take alternative action that would have prevented the damage.”

The manual continues to describe the process after stating financial integrity is of the “utmost importance.” Risk Management is specifically tasked to refer appropriate accident and damage reports to a City Damage Assessment Committee. They are also to evaluate and review all reports of damage and make recommendations to departments about safety and/or damage assessments from the incident. There are several reports and forms indicated throughout the policies, including an Accident Incident form.

But no damage reports were filed. No accident incident form was filed. No risk management report was filed. Despite city policy, in the falloffstone sculpture case, nothing happened.

It appears Dyer’s legal department has all city officials involved in the cover-up on lockdown. Earlier today, City of Orlando Asset Management Supervisor Kurt Mosser told me by phone, “I’m not authorized to speak for the city,” after being asked about why policy was not followed in this case.

So after a police report was filed for a stolen $175,000 city asset, no investigation took place. Despite detailed city policies and procedures, none were followed by the city’s risk management department. No city employee name is being provided despite numerous pubic records requests.

Once again, even more serious questions are being raised and the Dyer administration will have to come up with a better story than the one they are currently telling.

This is a developing investigation. Stay tuned for breaking updates and a multi-part series covering the falloffstone sculpture.