Community leader Lawanna Gelzer is turning up the heat on incumbent Orlando Commissioner Sam Ings ahead of the upcoming municipal election. Gelzer, who is challenging Ings in the District 6 race, slammed Ings for his excessive spending and raised questions about whether the longtime city commissioner uses public tax dollars for electioneering purposes.

“The record is clear,” Gelzer said. “The last ten years have been a clear indicator that our commissioner is bought and sold by the special interests and he is nothing more than a rubber stamp for Mayor Dyer’s destructive agenda on the City Council. Residents deserve a commissioner who puts the people first and someone who will be a true fighter for the community.”

Gelzer has been very active going door-to-door to reach out to voters ahead of Orlando’s November 3rd election. Last week, her campaign started delivering a hard-hitting mailer calling out the incumbent as “Spending Sam” (see the campaign literature below).

In the campaign literature, Gelzer first takes aim at Spending Sam‘s vote last year to raise property taxes on Orlando residents by 17.7%. The property tax increase is also a top issue in the current Mayoral race. “Ings has been a rubber stamp for the Mayor during every budget crisis,” Gelzer’s literature tells voters. “Ings is bad for working families in District 6.”

Gelzer also does not hold back when blasting Commissioner Ings for his mismanagement of public tax dollars. “Spending Sam recklessly mismanages your tax dollars,” the mailer states. “Ings wastes your public dollars on expensive meals, parties, travel and entertainment.”

Ings has been spotlighted in local news recently for exceeding his commissioner budget by nearly $30,000, spending almost $121,000 in just the last year. After an in-depth investigation launched by this site into Orlando City Commissioner spending, the spending by Commissioner Ings raises major red flags, including possible benefits to his re-election efforts.

For example, Ings spent $10,000 on last year’s District 6 Annual Seniors Thanksgiving Concert. The price tag was high for a community event, but most of the costs went to entertainment. The largest chunk of taxpayer dollars went to CMJ Resources & Development Group, an organization owned by Cora Miles Jefferson.

Ms. Jefferson was paid $4,900 for “management and entertainment artists” for Ings’ Thanksgiving concert. She was also paid another $1,545 for “advertising” by Commissioner Ings from his city account. It turns out, Ings spends a lot of money with CMJ Resources & Development, paying Ms. Jefferson another $1,000 in June 2015 and $2,300 during the 2014 summer. Ings also paid three other entertainers, including James Bolton ($1,500), Beverly Crawford ($3,000) and Robert Hatcher ($500) to perform at the Thanksgiving concert.

Now if that is not an endorsement bought with public tax dollars, what is?

Ings also contributed $2,500 to the Experience Christian Center last year, raising similar questions as to how residents feel about tax dollars being sent directly to a church.

Among other notable expenses, Commissioner Ings spent a whopping $30,000 for food, office supplies and other materials since 2014. There are thousands of dollars in catering costs, including more than $3,000 paid to College Park Foods, which is not based in District 6, to cater two events in his district last year. Ings also pays for his cell phone and his aide’s phone costs, spending another $2,200. The District 6 Commissioner also enjoys expensive entertainment options. He charged around $10,000 for his own travel, parking and conference fees. None of the other Commissioners use taxpayer funds to cover travel, parking and hotel costs similar to Ings and District 5 Commissioner Regina Hill.

At a recent candidate forum for District 6 presented by Orange County Black Voice and hosted by political organizer and community activist T.J. Legacy-Cole, Commissioner Ings was a no-show but his spending habits came under scrutiny from his opponents. In addition to Gelzer, Nathan Chambers, Marcus Robinson and Ka’Juel Washington are also running against Sam Ings this year. At the forum, voters could not receive any answers from their elected commissioner about how he is spending their tax dollars.

“I will listen to the people and implement the needs of the community, not the special interest groups, not the big developers, but the community,” Gelzer said at the candidate forum.

Gelzer’s campaign literature is creating buzz throughout the District 6 community. For Spending Sam Ings, there’s no escaping his own spending habits and voting record. You can review Commissioner Ings’ detailed spending and expenses since 2014 here.

Here’s the Gelzer campaign literature, Spending Sam, which is being delivered to District 6 voters: 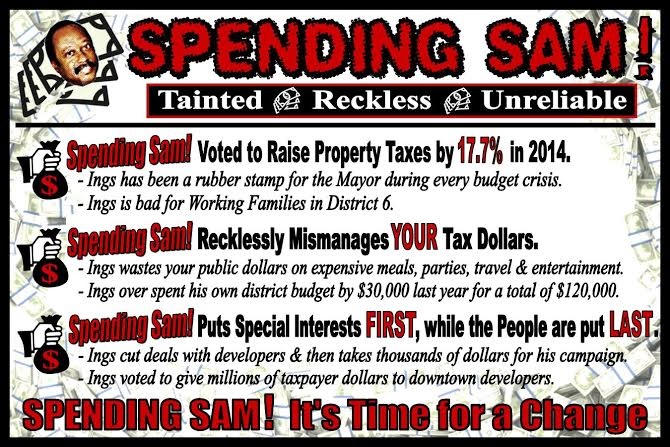 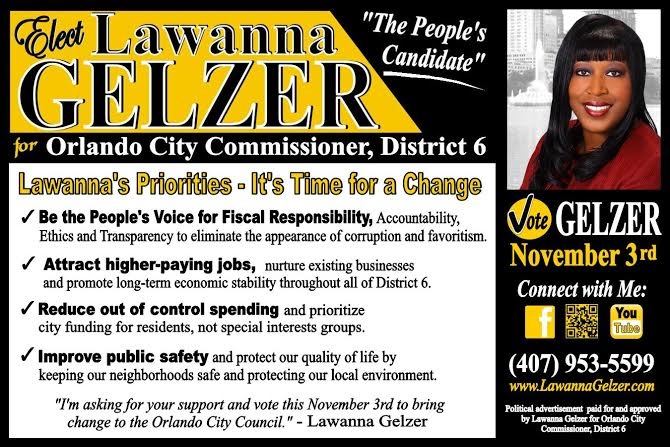