You are here: Home › City of Orlando › Angry Art Board Member Loses Temper & Attempts to Cut Off Public Comment 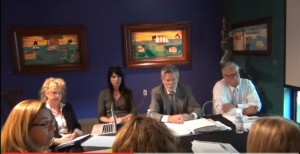 Orlando Art Board member Jim Lussier (second from right) was angry about comments he did not like and attempted to end official Public Comment early. The Art Board overruled Lussier and his outburst. City of Orlando employee Paul Wenzel (right) filed a false police report at the beginning of the cover-up. Watch the video here.

Orlando Art Board member Jim Lussier threw a tantrum during this month’s meeting while attempting to cut off official public comment before the allotted time was done. Lussier became visibly irritated when public comments linked an ongoing City Hall cover-up to senior administration officials and the city staffer assigned to the Public Art Advisory Board, Paul Wenzel.

I was in the middle of delivering my public comments to inform the city art board about new developments regarding the mysterious falloffstone sculpture, which was a $175,000 city asset, when Lussier’s interruption happened. Lussier is a close ally and donor to Mayor Buddy Dyer and an attorney at Mateer & Harbert.

My comments clearly struck a nerve when I presented official City of Orlando inter-office memos which were discovered through an exhaustive public records process. The memos involved numerous high-level city employees including Director of Leu Gardens Robert Bowden and Orlando Venues Director Allen Johnson, confirming the cover-up began after senior Dyer officials became involved. The memos, which were dated and sent to numerous city employees, also prove city employee Wenzel knowingly filed a false police report after being instructed to do so by his supervisors and the city Risk Management department.

The memos also clearly showed Wenzel first reported the true facts of what happened to Peter Shelton’s $175,000 sculpture to senior officials. One inter-office memo sent to Bowden and Allen Johnson stated one city employee admitted employees scrapped the sculpture after being instructed to do so by a supervisor. Just days after the memo was sent to Allen Johnson, the city changed the story to vandalism and then ultimately theft, although the Orlando Police Department never actually investigated the police report filed by Wenzel even though the city asset was valued at $175,000.

City officials even went to the Orlando Sentinel and WESH news with their lie about what happened to the city asset at the time. The city’s story was always a “metal thief” who likely scrapped the valuable art despite senior administration officials knowingly covering up the truth for years. “Regretfully, a metal thief went in with a saw and cut it away,” Orlando’s risk manager Ray Scullian told the Orlando Sentinel in 2013. “Unfortunately, like a lot of other things around town…they just get taken and sold for scrap.”

I have spoken with the artist Peter Shelton on a few occasions and reviewed his correspondence with city officials over the years. At one point, city attorney Amy Iennaco actually instructed Wenzel to no longer communicate with Shelton unless in writing. Shelton simply wanted answers and wanted his sculpture repaired, while the Dyer administration simply doubled down on the cover-up.

I first broke the falloffstone sculpture scandal after confronting Bowden, who oversees art for the City of Orlando, with information I received after speaking with numerous city employees. Additional public records showed the cover-up deepened only after the involvement of senior staff for Mayor Buddy Dyer. 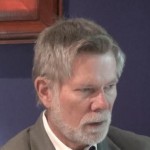 An angry Orlando Art Board member, Jim Lussier, at the November meeting.

At the November Public Art Advisory Board meeting, Lawanna Gelzer was recording and the video clearly showed my time had not expired as Lussier claimed in his outburst. She quickly informed me I had one to two minutes remaining when Lussier attempted to cut me off. After a few minutes of discussion, and as seen on the video from the meeting, the Art Board soon overruled Lussier and allowed me to finish my comments, with many board members saying they were interested in hearing more. Lussier’s attempt had failed.

However, Lussier also made additional comments that seemed to belittle his own city board. Before board members would even be able to discuss looking further into the falloffstone sculpture issue, Lussier insisted the Public Art Advisory Board had no responsibility and no role or function over city art once it is purchased or acquired. He did not even want board members asking questions about the matter, exposing the weakness of the board and the true lack of oversight and citizen participation for our public art. Lussier’s comments might also make some wonder who would waste their time sitting on city boards, when at the end of the day, they apparently have no influence or authority to do anything other than what City Hall wants them to do.

While Lussier’s outburst did cause an interruption, the facts remain the same whether the Public Art Advisory Board is nothing more than a facade or not. Watch video from the meeting here:

This is a developing investigation. Stay tuned for more updates and read more on the City Hall cover-up involving the $175,000 falloffstone sculpture: