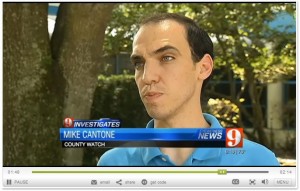 WFTV’s investigation picked up on two articles originally published on I Like Mike: here and here.

Dyer’s former campaign manager, Craig Borkon, fails to meet the minimum qualifications required and has never earned a college degree, also required in the official job posting by the City of Orlando. Making the whole situation worse, Dyer went out of his way to find this high-paying spot for Borkon in City Hall at the same time that the Mayor was fighting city employees who are part of the Service Employees International Union.

WFTV Investigative reporter Christopher Heath found that 12 other city employees applied for the job, yet none of them were even given the opportunity to interview. Some even hold master’s degrees in public administration. More proof that this entire process was rigged from the start. From the report:

But Mike Cantone with County Watch said the lack of qualifications and his connections to the mayor raise serious questions.

“The main point here is favoritism and whether cronyism is at play,” said Cantone. “There are many other city employees that would love to have this position.”

With the current $52 million budget crisis, Orlando is facing increased taxes, cuts in services, new “fees” and across the board budget cuts in all departments. It seems this is a good place to start cutting some of the fat and wasteful spending in City Hall. There’s no place for cronyism at the expense of the taxpayers. It’s a shame that Mayor Dyer and the City Council refused to provide city workers with the pay and benefits they deserve, all while looking the other way when a political crony is hired for nearly $70,000/year.