You are here: Home › City of Orlando › Commissioner’s Character Blasted in Court Documents 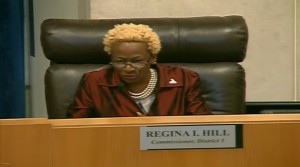 According to legal documents filed with United States Bankruptcy Court for the Middle District of Florida, sitting Orlando City Commissioner Regina Hill’s character has been called into question as her ongoing foreclosure problem continues. In the court documents, Commissioner Hill’s behavior is described as “implicating a scheme” and her actions show an “absence of good faith.” Despite her previous claims that she had resolved her legal problems, new court documents prove Commissioner Hill is still under pressure regarding her Baywood Avenue home, which is located outside of city limits.

The court documents ask for relief “in order to finalize the foreclosure/eviction process” against Regina Hill.

The trouble for the Orlando Commissioner began when Movant commenced a foreclosure action in the Circuit Court of the Ninth Judicial Circuit in and for Orange County, Florida, which ultimately resulted in the entry of a Final Judgment against Hill on April 22, 2015 in the amount of $164,081.57. The property in question was originally scheduled for public auction at the beginning of this year, but Commissioner Hill filed a notice of bankruptcy numerous times to delay the foreclosure.

“This is the third bankruptcy case filed by the Debtor since the entry of the
Foreclosure Judgment,” the new court documents stated. “The numerous filings and dismissals of cases shows a pattern of filings by the Debtor with no good faith attempt to confirm a plan indicating a scheme by the Debtor to delay and hinder Movant from exercising its rights in and to the subject real property.”

Commissioner Hill has attempted to dig herself out of this situation by filing a Chapter 13 bankruptcy plan, which states Hill will make payments totaling $3,000 each month for the next 60 months to her creditors. But as a City Commissioner, Hill is only making just over $52,000 a year and does not currently have another income, at least not one that is being disclosed publicly, which means it is not realistic she will be able to live up to her own bankruptcy plan. Hill also attended a credit counseling on August 24th but she did not prepare her debt repayment plan at that time. She now owes another $5,100 to her new attorney.

The facts and realities surrounding Regina Hill’s character and financial situation continued to be questioned. “The pattern of conduct which has emerged reveals that the Debtor is not sincere in reorganizing under Chapter 13,” attorneys for Movant claim in court documents.

In her own court documents earlier this year, Hill admitted the Baywood home as her “primary home” even though that would disqualify her from serving as city commissioner in Orlando.  The latest court documents called out the change from Commissioner Hill. “As reflected on Schedule ‘C’ of the Debtor’s Bankruptcy Petition, the Property has not been claimed exempt by Debtor.”

Because there have been two or more cases filed by this Debtor pending within the previous one year and the reasons the cases were dismissed, Movant seeks the entry of a court order confirming that no stay is actually currently in effect.

“The facts relating to Debtor’s bankruptcies reflect that the presumption of absence of good faith applies in regard to the filing of this case,” the court documents continue. “Nothing in the record demonstrates a substantial change in the Debtor’s financial condition since the dismissal of her last prior bankruptcy case on June 13, 2016, nor does the record provide any other basis upon which Debtor could rebut the presumption by clear and convincing evidence as to Movant.”

The current legal action against Regina Hill requests relief from the automatic stay so Movant and the bank “can pursue its in rem remedies without further delay.”

The next scheduled court date is a meeting between Hill and her creditors, currently scheduled for November 17th at 9am inside the George C. Young Courthouse in Orlando.