On Saturday, SunRail will run special service for various downtown events, including the Come Out with Pride Parade. The first train will be leaving southbound from the DeBary station at 1pm and the last northbound train will leave the Sand Lake Road station at 10:45pm, arriving in DeBary at 11:48pm. The full schedule is below.

The special Saturday service this weekend is part of a pilot program, but no additional Saturdays are confirmed for SunRail service at this time.

SunRail will be collecting fares on Saturday and riders should plan to arrive at the station platforms at least 30 minutes in advance of the departure time, according to FDOT officials. No food or beverages are allowed on the train, nor is smoking allowed on the train and the platforms. SunRail is asking riders to be courteous to others and to store bikes properly as the trains may be crowded. 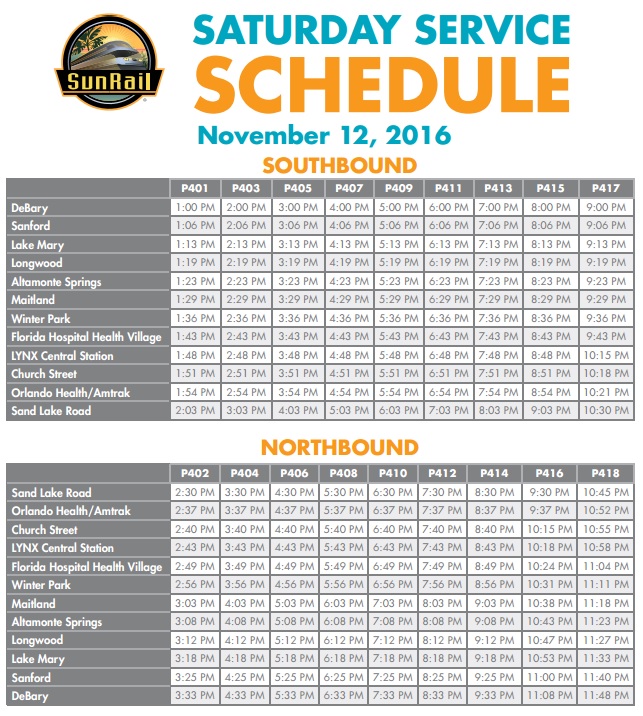 In addition to the Come Out with Pride Parade at Lake Eola park (use the Church Street Station & Lynx Central Station), there will be nine other events happening along the SunRail route. The Solar Bears will face off against the South Carolina Stingrays at the Amway Center (Church Street Station). The Festival of Trees will take place at the Orlando Museum of Art (Florida Hospital Health Village Station), while the Orlando Shakespeare Theater will hold performances of Stuart Little and Dr. Jekyll & Mr. Hyde (Florida Hospital Health Village Station) and PlayFest 2016: The Laramie Project will also take place there. The Young Maker Workshop, Musical Madness, Dino Safari and Guided Planet Tour will take place at the Orlando Science Center (Florida Hospital Health Village Station). There’s also the Historic Car Show at the Longwood Community Building (Longwood Station) and the Festival of Trees at the Lake Mary Station.

SunRail is hoping to see a boost in ridership with the Saturday service and so many events happening. If you’ve never been on SunRail, this is a great weekend to get out there and ride the train, but be sure to to tap on and tap off with your ticket so your trip will register. If riders will be using LYNX to make downtown or other connections, check LYNX bus schedules to see what time buses run.