You are here: Home › City of Orlando › Commissioner Admits “Primary Home” Outside of City Limits in Court Documents 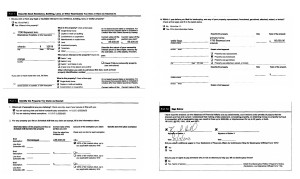 Forms from Commissioner Regina Hill’s bankruptcy court filing, admitting a property located outside of the city limits is her “primary home” and claiming it as her “homestead.”

According to documents filed in bankruptcy court, Orlando City Commissioner Regina Hill shockingly admits that the home she owns at 1790 Baywood Avenue, which is located outside of the city limits and facing foreclosure, is her “primary home.” In Hill’s voluntary petition for individuals filing for bankruptcy, Official Form 101, the Commissioner does claim to live at a city address on Cottage Hill Road; however, she later claims her Baywood Avenue home as an exemption. Hill claims the Baywood Avenue property as her “homestead” and claims it as exempt. In another section of Hill’s bankruptcy petition, she writes a description of the Baywood Avenue property as her “primary home” and lists its value at $85,000.

Regina Hill signed the court documents on January 14th this year, just one day before a public auction foreclosure sale on her Baywood Avenue home. Hill was able to postpone the foreclosure sale for the second time by claiming bankruptcy. In September 2015, a judge threw out Hill’s Chapter 13 filing for deficiencies as the City Commissioner never filed any of the required information and plans, leading to a ruling in favor of US Bank ordering a new public auction date for January 15, 2016. Hill filed the latest bankruptcy petition in an effort to save the only home she owns.

The multiple shocking descriptions used by Commissioner Hill in the court documents raise serious questions about her ability to serve as an Orlando City Commissioner.

If the troubled Baywood Avenue house is Hill’s primary residence, she would be out of her job as an Orlando City Commissioner. The Commissioner wrote in multiple sections of the court documents statements that claim her “primary home” is indeed outside of the city limits. If this is not the case, the Orlando Commissioner falsified court documents and knowingly provided false information. Deliberately lying on your bankruptcy petition, omitting information, or hiding assets is against federal law. According to the Orange County Property Appraiser’s office, Hill has not claimed a homestead exemption for property tax purposes as that would lead to her immediate removal from office as a city commissioner. But lying on court documents is a felony.

Hill has had a long history of trouble with the 5-bedroom, 3-bath home located at 1790 Baywood Avenue. Last year, a special magistrate found Hill’s Baywood Avenue property had not complied with code inspectors and had repeated violations. Regina Hill, as owner of the property, owes the county $46,750 in code violation fines. As of November, Hill told WFTV she still had not paid any of the fines.

The Final Judgement from April 22, 2015 against Regina Hill summarizes the more than $160,000 in unpaid mortgage, taxes and interest Hill owes on the Baywood Avenue home. The Orange County Property Appraiser shows Hill purchased the home back in 1997 at a sale price of $67,500 as part of a Housing and Urban Development program. The assessed value is listed as $79,250. The Clerk of Courts site also lists Commissioner Hill’s final judgement amount as $164,081.57.