You are here: Home › City of Orlando › Still No Action from City Hall to Follow State Law Regarding Honorary Marker 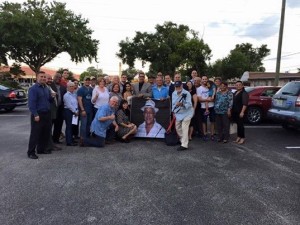 Last Friday, November 27th, marked the second anniversary of the passing of Elias Rico Piccard, who was “one of the loudest voices for the Puerto Rican and Latino community of Central Florida” according to the Orlando Sentinel in their obituary. In early 2014, the Florida legislature approved legislation, signed by the Governor into law, providing honorary designations of various roadways and transportation facilities while directing the Department of Transportation to install suitable markers. At the time, State Senator Darren Soto successfully designated a portion of Semoran Boulevard (SR 436) between the Beachline (SR 528) and the East-West Expressway (SR 408) as Elias “Rico” Piccard Memorial Highway. However, the designation still remains stalled to this day, waiting for a simple action by the Orlando City Council to implement the state law.

Every other marker has been installed. Every single one.

However, Orlando Mayor Buddy Dyer refuses to hold a vote on a simple ordinance to enact state law and allow the Florida Department of Transportation to install the honorary plaques because of Dyer’s allegiance to Republican City Commissioner Tony Ortiz, who opposes the honorary recognition and was a political foe of Rico Piccard.

Other than politics, it makes no sense why Mayor Dyer and Commissioner Ortiz would not pass a very simple procedural ordinance to allow FDOT to implement state law. As many have stated, it’s time to get this done. It’s time for the Orlando City Council to implement state law and honor veteran and community leader Rico Piccard. No more delays.

Here’s a message from community leader Zoraida Rios-Andino, issued last Friday as an update and call to action that this fight is far from over:

Today marks the second anniversary of Rico Piccard’s passing. As many of you know, a law was passed last year in the state of Florida to have a Marker erected on State Road 446/Semoran Boulevard in Orlando in Rico’s memory. This is not changing the name of a street. It is simply a Marker in his memory. Unfortunately, the Department of Transportation requires that the City of Orlando simply pass a resolution so they can do their job and erect Marker. Republican City Commissioner Tony Ortiz does not want the resolution passed. He claims he was not consulted about this Marker before legislation was passed. Democrat Mayor Buddy Dyer will not even meet with community leaders on this issue and does not want to help.

Out of 73 individuals named in this legislation, 72 have had their markers erected throughout the state except for Rico Piccard. Mision Boricua will continue the fight for justice. There will be new revelations on District 2 issues coming up in the near future. I would like to take this opportunity to all who have helped with this noble cause. We have held a Press Conference, we confronted the Orlando City Council and we held a Vigil for Rico on his birthday (see picture below). Gracias de corazon for your support. I am confident justice will prevail and as Rico would say “Arriba Los De Abajo!”