A quasi-judicial hearing will take place tomorrow morning as residents continue to fight against a developer attack on wetlands and protected species habitat that are part of the Wekiva River Basin. A plan by City Hall insiders calls for wiping out more than one hundred acres of pristine and virtually untouched wetlands in Orlando to build two industrial warehouses which will threaten several residential neighborhoods, several protected species and the Wekiva River Basin.

The property is located on Wd Judge Road between John Young Parkway and Mercy Drive, and water on the property drains into the Fairvilla Canal, which drains into Lake Lawne. Lake Lawne is the headwaters, or beginning, of the Little Wekiva River. The area includes 146 acres of pristine and virtually untouched wetlands currently providing important habitat for several protected species including bald eagles, osprey, gopher tortoises, wood storks, eastern indigo snakes, and a bat species that is suspected to be the endangered bonneted bat. Residents are outraged and with good reason. Dr. Wanda Jones has been leading the way along with several other concerned residents to stop the controversial planned development proposed by CNL and VHB, developers with close ties to Mayor Buddy Dyer. The surrounding area is a predominately African-American neighborhood, raising additional community questions and concerns about the votes of the Mayor and City Council on the necessary ordinance changes.

“Environmental injustice tends to happen quite frequently in African-American neighborhoods,” Dr. Jones told City Council members. “This doesn’t seem to happen too much in Caucasian neighborhoods.”

There are major community concerns with the proposed controversial development, many of which were outlined for the City Council last month by Dr. Jones and other residents. The City Council eventually tabled the hearing after the public outrage, realizing the city was once again not prepared for the community opposition. 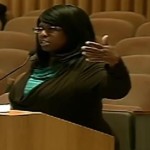 The proposed industrial warehouses will be located less than 500 feet from local neighborhoods and developers plan to use them as a drop-off destination for freight carried by semi-trucks. However, scientific studies conducted by the Center for Disease Control and OSHA show exhaust from diesel trucks and construction vehicles release chemicals and particles that can lead to cancer, heart disease, respiratory diseases, blood clots and gene mutations, among other illnesses.

“We are just as important as any of those neighborhoods are,” Dr. Jones declared. 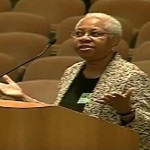 Amy Jones, a 45-year Orlando resident who is active in her neighborhood association and canvassed her neighborhood regarding this issue, expressed the concern from the community. “They are very much dismayed by this project,” Ms. Jones said. She outlined several concerns related to increased traffic, public safety threats for children and environmental impacts. There is a community center located near the proposed location.

“Please think about us!” Ms. Jones declared to the Mayor and City Commissioners. 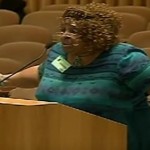 Orlando resident Marchelle Robinson also spoke out against the ordinance change which would allow the industrial development. She detailed opposition from area churches and neighbors who were not able to attend the City Council meeting as well. She told City Commissioners more would write letters to document their opposition in writing.

“They’re changing the ordinances for industrial? That is ridiculous,” Ms. Robinson said. “It is environmental injustice. They do not do this in certain areas. Why are they doing it in my home?”

In addition to the environmental threats to the Wekiva River Basin and protected species habitat, many of the residents in the area are our community’s most vulnerable – senior citizens and children.

Of course, this industrial development deal is being planned by City Hall insiders CNL Commercial Real Estate and VHB. Both companies have a lot of influence over Mayor Dyer and the current Council. CNL representatives share Dyer’s skybox suite and contribute thousands of dollars to Dyer’s re-election efforts, while VHB conducts city studies like the controversial Parramore plan justifying gentrification and displacement of residents for new developments and the struggling city-supported Creative Village project.

These wetlands are important because they absorb large amounts rainwater and prevent flooding. The wetlands on this property also filter pollutants out of the water so water flowing from that land into Lake Lawne is clean. The Wekiva River Basin is a large region of land in Seminole, Orange, and Volusia counties, and rainwater drains into lakes, streams and rivers that feed into the larger Wekiva River.

“Per a conversation I once had with Mayor Buddy Dyer, the City of Orlando promotes conservation efforts,” Dr. Jones wrote in her letter officially petitioning against the development. “This proposed development does not support this position, especially considering its status as a wetland and important wildlife habitat. If Orlando truly supports conservation efforts, this acreage would be an excellent conservation education area which the City of Orlando does not currently have within the city, at least not one that contains the diversity of plant and animal species found on this acreage.”

Residents simply want to protect their environment and protect their community. The November 18th hearing at 9am in the Veteran’s Conference room on the 2nd floor of City Hall is a direct result of the hard-work and passion of Dr. Jones and the other residents who are fighting back against powerful special interests of Mayor Dyer.