You are here: Home › City & County Relations › A Tale of Two Skybox Suites at the Rolling Stones Concert 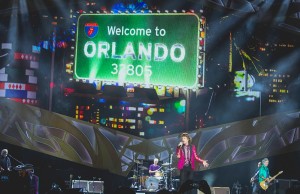 There were two very different sets of attendees in the City of Orlando and Orange County skybox suites when the Rolling Stones rocked the Citrus Bowl last month.

In keeping with her own practice of distributing these tickets to charitable groups, Mayor Jacobs has established an unwritten policy urging the Board of County Commissioners to donate tickets to non-profit organizations. “This is actually a continuation of the practice I first established as the District 1 commissioner, and it has now become our model,” Orange County Mayor Teresa Jacobs said.

Based on the attendee list for the City of Orlando skybox suite, more questions could be raised about the proper use of the public skybox suites by city elected officials, as the Orlando Venues are public venues.

Inside the City skybox, Dyer and his wife, Karen, were joined by some of City Hall’s top officials. Chief of Staff Frank Billingsley, CFO Rebecca Sutton and newly appointed City Clerk Celeste Brown were all in the suite, and each brought a guest. Commissioner Regina Hill was also in attendance as a guest of the Mayor in the skybox.

Jay Berlinsky, a longtime friend of Mayor Dyer, joined the other city officials with a guest as well. Berlinsky is the founder and owner of SC Advisors, a development company that has worked on various city projects including the Amway Center and Citrus Bowl. In 2013, the Orlando City Council approved a no-bid contract with Berlinsky to serve as the city’s representative during the Citrus Bowl renovations, which was pushed by Dyer. His company was paid $14,500 a month under a three-year contract, according to the Orlando Sentinel. Berlinsky’s company had the same role during the Amway construction.

Must be nice to be friends with Buddy Dyer. No-bid contracts, huge payouts from the City and free skybox tickets to the Rolling Stones with the Mayor. But perhaps Berlinsky did “pay” for the tickets, using campaign contributions to repay Dyer. Just four days after the June 12th Rolling Stones concert, Berlinksy’s wife Kathleen donated $500 to Dyer’s re-election campaign. That same day, Berlinsky’s SC Advisors also donated $500 to Dyer’s campaign. Berlinsky also was Executive Vice President of CNL Realty, which by the end of June, had donated $7,000 to Dyer’s re-election.

Also joining Dyer in the skybox was Greg Lee, a partner at powerhouse law firm Baker & Hostetler, who specializes in sports law, land use, real estate development and government relations. Lee was recently appointed to the OUC Board, where his term ends December 31, 2016, and was the Orlando Magic team counsel involved in pushing the Magic entertainment complex next to the Amway Center. Lee also served as lead outside counsel to the United States Tennis Association (USTA) in the development of what will be the national headquarters of USTA Player Development in Lake Nona.

Political consultant and lawyer-lobbyist Screven Watson also joined the mayor in the skybox. Watson was the former Executive Director for the Florida Democratic Party when Dyer was minority leader in the state senate. Watson was an adviser for Dyer in Tallahassee, and also aided Dyer’s previous statewide campaign effort when he ran for Attorney General. Interestingly, Celeste Brown recently left her longtime position in Senator Bill Nelson’s office to come to City Hall and it makes you wonder if any conversations in the skybox hinted at possible future campaign plans for Dyer.

Another close Dyer ally and personal friend, Jennifer Quigley, attended the concert as a guest of the Mayor. Quigley served as chairwomen for See Art Orlando and is an appointed member of Dyer’s Downtown (DTO) Task Force. Years ago, Dyer even declared one day as “Jennifer Quigley Day” to honor her, according to Orlando Magazine.

It’s clear Mayor Dyer likes to entertain and show off to his closest allies and friends, especially when a huge event like the Rolling Stones concert comes to Orlando. But Dyer’s attendee list is very different compared to Orange County’s attendees.

At the June 12th Rolling Stones Citrus Bowl concert, seven different charities benefited from the Orange County skybox suite compared to the political supporters of Mayor Dyer. Twelve tickets were distributed to the Board of County Commissioners, with each Commissioner receiving two tickets, and four tickets were retained by Mayor Jacobs’ office.

“At the end of the day, public service is about helping others and this is just one small way that the Mayor’s office and the rest of the Board of County Commissioners are able to help the community in which we all serve,” Mayor Jacobs said.

According to the terms of the Community Venues Interlocal Agreement, the City of Orlando and Orange County each get skybox privileges. The two mayors have the option of using up to 24 tickets each, but typically elect to use 16 tickets as they will be charged to use tickets 17-24, based on information provided by Orange County.

“There are so many worthy non-profits in Central Florida, and our office has received great feedback from donating tickets to help in their fundraising,” Mayor Jacobs added. “Some of the non-profits that have benefited include Wounded Warriors, I-Dignity and Kids Beating Cancer.”

What a difference in the tale of two Citrus Bowl skybox suites at the Rolling Stones concert.